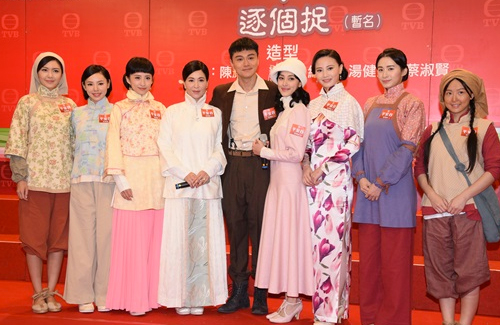 Grace Chan (陳凱琳) will be playing herself in the upcoming TVB period drama Safety Valley, Catch One by One <平安谷·逐個捉>, produced by Speed of Life <鐵馬戰車> creator Andy Chan (陳耀全). The drama, which takes place in post-Qing China, focuses on the topic of gender inequality as it centers on a conservative family living in a traditional Chinese village. Grace Chan plays the family’s new daughter-in-law, who was educated in the West. Raymond Wong (黃浩然) stars as her her husband, who is caught in between the cultural differences between his family and wife.

The role appears to be mirroring Grace in real life, who grew up in Canada. The 2013 Miss Hong Kong champion was teased for mixing up her Chinese idioms at Saturday’s live broadcast of the TVB Anniversary Gala, becoming the night’s golden light.

A costume press conference for the new Andy Chan drama was held yesterday, attended by the main cast. Asking Raymond if he would pay extra attention to Grace when she’s reciting her dialogue, Raymond looked like he had enough of the Grace idiom jokes, and said, “I’m more concerned about me saying the wrong lines. We also have two very annoying and talkative costars, Willie Wai (韋家雄) and Louis Yuen (阮兆祥). Willie repeated ‘fan san sui gwat’ (粉身碎骨) like a million times when we had our meeting this morning.”

Raymond introduced his role to be Lau Kong’s (劉江) son, who was raised in a traditional household but was exposed to Western values when he studied abroad in the United States. This light-hearted comedy drama will tell his story, as well as the eight other women in his life.

Safety Valley is notably Louisa So’s (蘇玉華) first TVB drama since 2015’s Lord of Shanghai <小熊>. She plays Lau Kong’s second wife, and is the family’s housekeeper. Come Home Love <愛回家> star Max Cheung (張達倫) plays her lover. Revealing that she has a kissing with Max, Louisa joked they won’t need to prepare for it, as Max already had enough practice with his wife.

TAGS: Grace Chan, Louisa So, Raymond Wong, Safety Valley Catch One by One