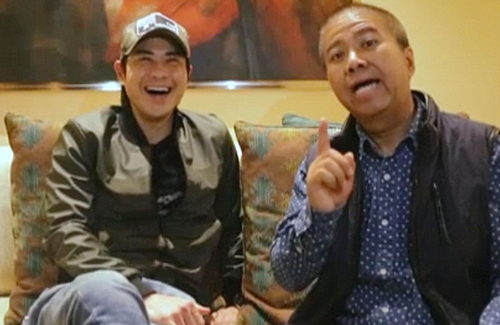 Kevin Cheng (鄭嘉穎) had an unfortunate brush with the law while shooting his new movie, Made in Kowloon <九龍不敗>, in Macau.

The film’s brief brush with the law happened a few days ago, when those that were involved in the film were brought to the Macau police station for questioning. According to the source, Made in Kowloon did not obtain a filming permit when they shot a part of the movie in a restricted area of the city. When the crew failed to provide a good explanation to why they had no permit, the Macanese police had no choice but to bring them back to their headquarters for further investigation. Those who were “arrested” included director Fruit Chan and Kevin Cheng.

After getting taken in by police, Kevin immediately phoned his girlfriend Grace Chan (陳凱琳) to fill her in about the details. Grace, who has been shooting the TVB drama Safety Valley <平安谷‧逐個捉>, reassured reporters that Kevin is safe.

“What I know is what everyone else knows,” Grace told the reporters. “I received his phone call this afternoon while I was doing some outdoor shoots [for Safety Valley]. He told me what happened and said not to worry. I’m sure the film crew will handle the issue, and I hope he’ll be able to get back to Hong Kong tonight. I’m sure he’ll update me if there is anything more.” (Worried about Kevin?) “I’m sure he’ll help with the investigations and that everything will be taken care of. Now we can do nothing else but wait.”

Producer Raymond Wong Pak-ming (黃百鳴), owner of Pegasus Motion Pictures, also offered an update: “When it happened, Kevin was filming in front of the Security Force headquarters. Because the film crew did not apply for a permit, and director Fruit Chan was very invested in the scene, he told Kevin to go into the building and come back out. Kevin is only with the police to assist the investigations. He is just doing what he was told to do, so I’m sure Kevin will be fine. Director Fruit Chan, however, might have to stay in longer.”

Yesterday, Made in Kowloon’s official social media accounts were updated with the information that Fruit Chan, Kevin, and the rest of the crew have left the police. In a video, which they shot right after returning to Hong Kong last night, Fruit and Kevin explained that they had unknowingly shot in a restricted area, which prompted the police to take them in for questioning.

“Kevin is the most innocent, as he had to get dragged along with me,” said the director. “But we are fine now.” Kevin then said that the Macau police were “very nice” and that they had great food.

“It’s better than our take out food,” the director joked.

Despite the mishap, Made in Kowloon will continue filming in Macau. The director said he will keep in mind about the city’s permit instructions in the future. He also apologized for the inconveniences that his careless mistake had caused.