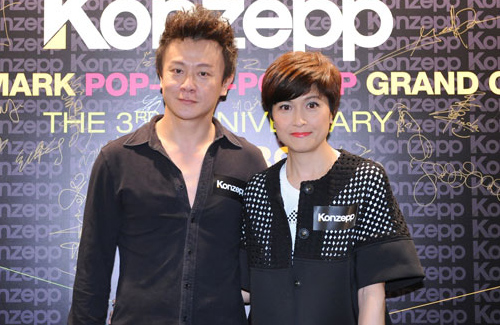 Maggie Shiu (邵美琪) and martial arts star, Vincent Sze (施祖男), announced that they have ended their six-year relationship. Gossip magazines reported that Vincent, who is younger than Maggie by ten years, had cheated with another woman. The pair issued a joint statement and admitted that they had broken up, but silenced defamatory rumors over the cause of the split.

Meeting on the set of Johnnie To‘s (杜琪峯) Tactical Unit – Comrades in Arm <機動部隊—同袍>, Vincent aggressively pursued Maggie. Vincent soon moved into Maggie’s apartment and they maintained a low-profile romance over the years. Last year, the couple was even rumored to have gotten married. Although she denied the news, the 49-year-old actress always glowed in happiness when discussing Vincent.

It came as a surprise when Maggie and Vincent’s relationship ended abruptly. Tabloids claim that while Maggie was filming in Mainland China, Vincent had cheated with another woman. After a heated argument, Maggie demanded for a breakup and asked Vincent to pack his bags and go back to France.

Although Vincent hoped that Maggie would eventually change her mind, an insider revealed that Maggie was firm in her decision to end the relationship.

Responding to the damaging speculations over their split, Maggie and Vincent wrote in a joint statement,”We believe in fate.  There is no need to think too much over the incident. Our breakup was due to personal reasons, and does not involve a financial [dispute] nor third party. We will no longer respond to any subsequent inquires over the matter. Hopefully, our hard efforts will continue to receive everyone’s support. We will always remain as friends and support each other.”