Deric Wan and Maggie Shiu Reunite In “It Was You” 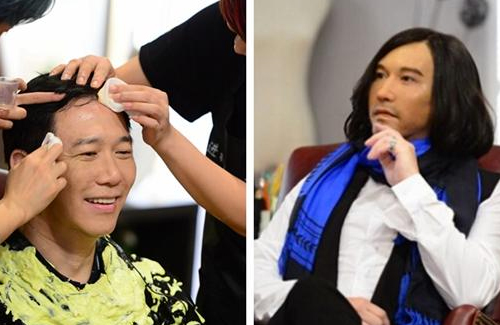 The first episode of the new Chinese original reality variety show It Was You <原來是你> premiered on Wednesday, October 14. The first guest on the show was Hong Kong actor Deric Wan (溫兆倫), who went through various prosthetic transformations to pull pranks on his close friends Benz Hui (許紹雄), Chan Po Wah (陳寶華), and Maggie Shiu (邵美琪).

In the first episode, the show invited former TVB scriptwriter Chan Po Wah and TVB artistes Benz Hui and Maggie Shiu to a fake program called The Legend of New Talents <新秀奇緣> under the pretense that they were to be the judges of a new talent show. Deric then went through a prosthetic transformation to change his physical appearance so his friends could not recognize him.

It Was You is formatted into four different stages. The first stage is the “transformation” stage, which is to show the audience how the guest transforms into a different person through prosthetic and makeup application. It was said that the show hired a Hollywood special effects makeup team to transform Deric, but many viewers said Deric did not look much different from his original self.

The second part is the “guessing” stage. Celebrity judges closely monitor the transformed guest’s appearance from a secure room, and they help the guest complete his or her missions. The third element is the “lying” stage, in which the guest will attempt to fool other stars on the show. The last stage is “rip,” when the guest reveals itself to the audience.

For the first episode, Deric went through those four stages to pull pranks on Chan Po Wah, Benz Hui and Maggie, three of his closest friends in the industry. Chan Po Wah, Maggie, and Deric became close friends after collaborating in the 1990 TVB drama Blood of Good and Evil <我本善良>. Chan Po Wah was the drama’s scriptwriter, while Deric and Maggie played a couple.

Blood of Good and Evil was a hit when it first broadcasted in Hong Kong and Mainland China, and Deric’s role Chai Ho-nam was touted as one of the most classic TV characters in history. Without knowing that Deric was associated with the show, the It Was You staff asked Chan Po Wah about her most favorite actor, to which she immediately replied Deric. However, she then took a stab at Deric when she revealed that she initially created the character “Chan Ho-nam” for Tony Leung Chiu Wai (梁朝偉).

Deric then paid Benz Hui a visit, pretending to be his stylist. Deric even boldly went for a grab at Benz Hui’s chest, surprising the Line Walker <使徒行者> star.

Deric eventually revealed himself to his two friends; Benz Hui was so shocked that he even cursed on camera. Chan Po Wah and Benz Hui were then invited to the main stage, where Deric would reveal himself to his last friend, Maggie. Deric attempted to reenact a classic scene from Blood of Good and Evil with Maggie, but Maggie looked reluctant. When Deric ripped off the prosthetics from his face, Maggie cried and hugged him.

“Why are you here? Why are you making yourself suffer like this?” Maggie cried with a wide smile. In tears, Deric replied, “I haven’t seen you in many years. I miss you. I want to tell you that, to be able to have met you is one of the luckiest things that have happened to my life.  No matter what happens, no matter where you go, I will always be your friend. I will always protect you.”

Deric and Maggie’s reunion on stage have left many fans in tears. Many netizens left comments saying that they missed this golden pairing. Having grown up watching TVB dramas of the 80’s, many fans say that the episode took them a trip back down memory lane.

It Was You will be airing every Wednesday on Jiangsu TV.

TAGS: Benz Hui, Deric Wan, It Was You, Maggie Shiu