With his upcoming concert in February 2019, Ekin Cheng’s (鄭伊健) Facebook page has asked fans to post the names of his songs that have most represented their love lives, and that they would like to hear. But what song would Ekin choose for himself? In a recent interview, he talks about previous relationships and how they have affected him.

Ekin’s own love life has in the past been the subject of much media speculation. And now, having been married for five years to Yoyo Mung (蒙嘉慧) after dating for seven years, his song of choice about past loves would be “Kiss” <吻感>, which is a homophone for “sensitive” in Cantonese: “Because I’m an artiste, the difference between what is real and what is fake is really complicated, and each is a memory. I think that this song would suit artistes.”

In an interview last year, Yoyo revealed that Ekin has been affected by all the media attention on his previous relationships with Maggie Shiu (邵美琪) and Gigi Leung (梁詠琪), to the extent that for a few years, he refused to go out to celebrate his birthday. According to Yoyo, she had enough of this one year, and took him out through the back door to go out to celebrate. When asked about this, Ekin said, “For a few years on my birthday, we would see that reporters were out at the front of our home, and we would go out through the back door, and run onto a bus. When we returned they wouldn’t know that we had actually left the house; it was quite romantic.”

So how does Ekin now approach all the talk about his past love life? “It’s not a big deal. After time passes, you have to face it; it’s your choice. Of course, if you ask about what happened before, I didn’t know how to handle it, and felt that there was no need to make a big deal out of it. It’s best if it didn’t happen, and I feel that it is a personal matter, but it has passed. Now I’m more mature and stable, and can face what happened in the past.  When things like that happen, then you are able to find yourself.” 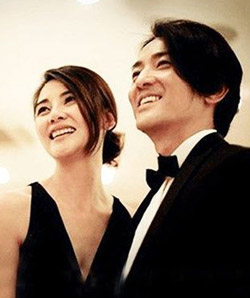 The stability of Ekin and Yoyo’s relationship is also shown in his response to the surprise short video that Yoyo made for him in support of his upcoming concert. “I’m really happy about it. Actually, I’m happy whether she had filmed it or not. When our relationship is very stable, then I can do a good job. The things we like to do are very similar, and usually we do things we like together. When it comes to work, I’ll really focus on it. That’s the best situation, because then I don’t have to worry about other things, and can focus on doing a good job.”

Ekin’s big heart does not only extend to Yoyo, but also his friends and family. Having been in the industry for over 30 years, he also tries his best to help upcoming artistes. In a previous interview, Lai Lok Yi (黎諾懿) revealed that he was previously so poor that he had to live in a partitioned flat and that Ekin would offer to lend him clothes to wear.

When asked about this, Ekin replied, “I feel that he has potential, and some things you shouldn’t spend money on. Clothes need to be worn, so long as he doesn’t mind, I hope that he will wear them. Even though this industry is quite complicated and political, you can choose to communicate in a simple way.”