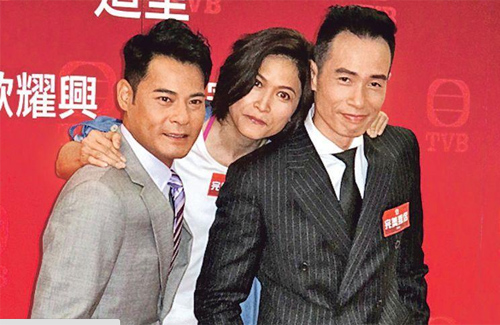 Already possessing a rather tall and lanky statue, Moses Chan (陳豪) appeared to have lost quite a bit of weight when he attended the costume fitting of new drama Perfect Rebel Companion <完美叛侶> (tentative title).

Moses’ busy summer schedule accounted for his weight loss. Moses and Aimee Chan (陳茵媺) took their two sons to water parks and the beach. Rather than being unhappy about being photographed by the paparazzi during his personal time, Moses joked, “My body was photographed – not bad, right? Actually, we let the kids play in the water quite often. As parents, seeing our kids having fun is all that matters.”

The Importance of Spending Time With Significant Other

In Perfect Rebel Companion, Moses plays a lawyer whose relationship with his wife, Maggie Shiu (邵美琪), turns sour when she cheats on him with another man. Due to a lack of communication and a dying spark, Moses and Maggie slowly become the boring and typical couple. In contrast to the career-driven Moses, Maggie plays the role of a hopeless romantic who longs for love. Unable to find this feeling in her husband, she eventually leaves him for Ben Wong (黃智賢).

When asked if she will have intense kiss scenes in the series, Maggie shook her head, “The producer told Ben that he should forget about it altogether – our relationship is going to be very simple and pure. However, we don’t know if there are some romantic scenes yet – maybe we’ll add them in later.”