In the latest episode of talk show 3 Fools <三夫當關>, co-hosts Kenny Kwan (關智斌), Carlos Chan (陳家樂), and Angus Yeung (楊天宇) revealed how they joined EEG. Kenny, who joined the company before the other two, “auditioned” with a very difficult song – Leehom Wang’s (王力宏) “The One and Only” <唯一>. Laughing, Kenny said, “I sang it in the boss’ office. Afterward, I asked Mani Fok (霍汶希) if she signed me because I sang great.”

However, Mani responded, “No, I have never seen such a shameless boy who sang so terribly, but thought he sounded great. We need someone like that.”

Just like that, Kenny started his 16-year journey at EEG. Similarly, Carlos also began his career by singing. He humbly said, “I thought I sang really well, so I joined the company’s singing competition, but Mani wasn’t the one who signed me. The other staff signed me when Mani was not in Hong Kong, so she was really angry when she came back. She asked why ‘this guy’ was signed.”

He recalled Mani asked him, “Carlos Chan, tell me, why should I sign you?”

Of course, Carlos was terrified. “I couldn’t tell her that everyone thought I was handsome. I thought she wanted to terminate my contract immediately, so I could only say, ‘Sorry Mani, I will do my best in the future.’ ”

It turns out Mani always asks, “Why should I sign you?” before signing someone. At the time, Kenny confidently answered Mani, “Because I’m handsome.” 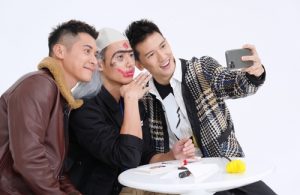