In the new TVB series Life on the Line <跳躍生命線>, Matthew Ho (何廣沛), alongside Joe Ma (馬德鐘), Moon Lau (劉佩玥), and Kelly Cheung (張曦雯), plays a man from the grass-root level who strives to be a paramedic.

As a rising TVB actor, Matthew has appeared in various dramas including Tiger Mom Blues <親親我好媽>,  A General, A Scholar and A Eunuch <超時空男臣>, and Succession War <天命>. From his usual gentle and polite roles, he is now challenged with a new type of character in Life on the Line.

His character, Chek Ka Kit, differs from himself and his background, but Matthew is excited to take the challenge. He shared, “There was a time where I doubted my ability to act this role well. With my other roles, there was a bit of Matthew in them, but with Chek Ka Kit, I couldn’t find myself at all. I had to wear a wig, wear an unfashionable fanny pack and shoes. Throughout the whole drama, I didn’t even gel my hair!”

However for this role, Matthew is willing to try his best, which includes training his body. During the filming, Matthew received actual training from the academy. He said, “We were taught by professionals in the field. Even if we made a mistake, they would make us do 20 push ups. After every session, my feet would ache and my muscles would be sore!”

When Matthew was studying in the United States, he only weighed 120 pounds with the height of 5 feet 9 inches. After becoming a bigger eater, he made sure to exercise every single day as he tends to gain weight easily.

Like his character in the drama, Matthew also has high expectations for himself and wants to excel in the opportunities given to him. He shared, “From the minute I got into TVB’s acting class, I made a conscious effort to never be late. A lot of my class mates wouldn’t come until the last minute. But I force myself into this routine so that I can be efficient and effective at work.” 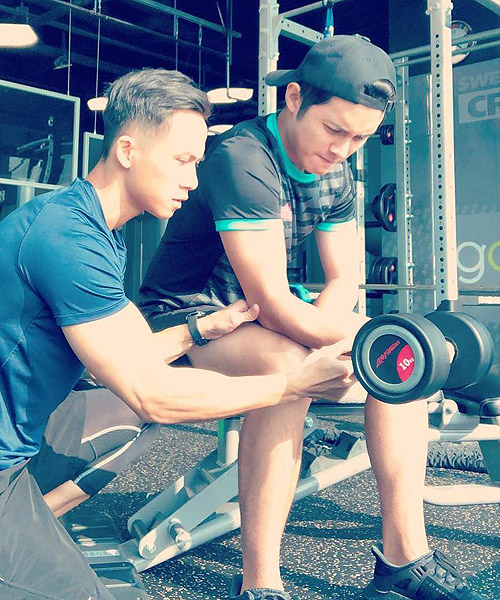 Above: Matthew Ho regularly works out to avoid weight gain.