By jayne on December 19, 2011 in Exclusive, NEWS, Star Interviews 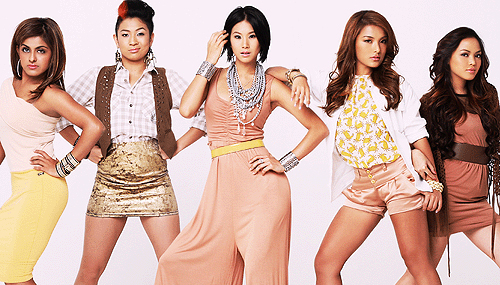 Meet pop music’s first pan-Asian girl group, Blush, which was formed after the winners were chosen in televised talent competition, Project Lotus, in 2010. The five stunning and multi-talented Blush members include: Alisha Budhrani from India, Victoria Chan from Hong Kong, Natsuko Danjo from Japan, Angeli Flores from the Philippines, and Ji-hae Lee from South Korea. Blush collaborated with Snoop Dogg in their debut single, Undivided, which climbed to the #3 spot on the U.S. Billboard Dance Charts earlier this year. Blush’s newest song, Dance On, secured the #35 stop on the U.S. Billboard Dance Charts in December 2011.

Since their debut, Blush has opened for concerts for Justin Beiber and the Black Eyed Peas, performing to zealous crowds in Asia and the United States. Although most of Blush’s songs will be in English, the group will also be singing in other languages for future releases. In an exclusive interview with JayneStars.com, Blush members speak about their music influences, working with some of the biggest stars in pop music, and their future plans.

JayneStars: Can you define what Blush’s music style is?

Angeli: You can say that it’s pop music. It’s fun and edgy, but it’s a certain style of pop music that has a lot of musical influences. I think this is because, as a group, we have such eclectic taste!  We weave elements of hip hop, techno and rap into our music, but we’re also increasingly experimenting with music from our own cultures – so it’s a real melting pot – just like Blush!

Alisha: Good question; there are definitely challenges in producing music for a global audience. By trying to appeal to everyone simultaneously, we often risk not appealing to one specific group enough to build our fan base. As far as West versus East, the sad thing is that it’s often less about the music and more about our “look.”  We have to change our look – our hair, makeup, and wardrobe – as we travel. A lot of the time though, especially in Asia, we’re simply channeling a different side of Blush. For example, when we go to Japan, we try to embrace Japanese fashion and naturally, this is where Natsuko’s really in her element.

Musically speaking, we find that our fans in Asia prefer ballads and songs that really showcase our vocals whereas in the West, our fans love our up-tempo, dance songs. We love performing all of our music so we’re happy to go with the flow.

Natsuko: I’m definitely a hip hop person. Lil Wayne is one of my all-time inspirations for his unique style and beats. Christina Aguilera also inspires me; it’s her powerful voice and the raw emotion in her music.

Alisha: Beyonce, of course! Priyanka Chopra, too, because of the passion and dedication they both exhibit in their work.

Angeli: I’m inspired by Regine Velasquez (who is also from the Philippines!) and Alicia Keys. They both have beautiful voices and appear quite humble in nature.

Victoria: There are so many! I think my main two singers would be Celine Dion, for her classic style, and my current favorite, John Mayer, for his amazing guitar skills and soulful voice. His good looks don’t hurt either!

Ji-hae: I love two local Korean artists, Hwayobi and Younkwon Na, and international artists such as Stacie Orrico, Joss Stone, Keysha Cole and Sara Bareilles inspire me a lot too. I love any musician with a really great voice!

JayneStars: The members of Blush were chosen after successfully competing in reality television show, Project Lotus. What unique qualities does each member possess that made her stand out and chosen to become a member of Blush?

Victoria: Natsuko has a strong dance background, as she started dancing at a very young age in her mom’s dance studio.  I think this along with her distinctive and soulful voice make her stand out a lot.

I think Angeli is such a natural stage performer; she’s been participating in singing competitions in the Philippines since she was 8 years old.  I also know that Angeli’s family is very musical. Her powerful vocals make her an obvious choice.

For Alisha, I think her extensive background in dance and choreography was a definite pull-factor. She has previously performed for well-known artists in Hong Kong, in front of large audiences of about 10,000 people. When you watch her on stage, her experience is pretty evident – she’s really quite a confident performer and often gives the rest of us little bits of advice.

Alisha: Thanks, Victoria! Actually, when I think about who’s made the biggest transition in their lives, it has to be Ji-hae. She only started singing after she graduated from university – where she studied law!  It was clear that she wowed everyone at auditions with her voice – she has amazing pitch– as well as her natural beauty and sweet, humble personality. I think she was a no-brainer for the judges.

I feel Victoria has the most vocal experience among us. She’s been involved in over 100 productions around Asia, including the 2008 Beijing Olympics Torch Relay song. She’s been singing since a young child and trained in ballet, tap dancing, ballroom and Latin. She’s very beautiful inside and out. She also looks after all of us.

JayneStars: Since its debut last year, Blush has had an incredible journey, performing across the globe and achieving wide recognition. What was it like working with Justin Bieber and Snoop Dogg?

Ji-hae: Working with Snoop and Justin Bieber was incredible! Snoop is so cool and really tall! Even though he’s a superstar, he was really friendly and even shared his love for Roscoe’s Chicken and Waffles with us; he brought some for us to try!

It was also pretty unbelievable that we were given the opportunity to open for Justin Bieber in Hong Kong; it was such an honor! We sang three of our original songs, Make You Blush, Fell in Love with a Song, and Undivided.  The audience was really supportive of us and the atmosphere at the concert hall was so overwhelming; I had such an adrenaline rush the whole time!  We really loved every minute on stage.  Actually, we were asked to open Justin Bieber’s concert in Japan, but we couldn’t because we had to go to Los Angeles to shoot our music video with Snoop Dogg.  What a difficult decision to be faced with!!

JayneStars: For members of Blush, a dramatic transition occurred over the last year due to fame and increased popularity. Can you describe the transition and how it feels to live the life of a celebrity?

Natsuko: I think we’re all still adapting to the changes in our lives. At the moment it’s all about working really hard to get our music out there.  I don’t think we’d say we’re famous yet but the attention we do get has taken a bit of getting used to. Man, especially with the internet – when people post negative comments about you – sometimes the feedback is hard to take, and we do get quite protective of one another when people single out individual members of Blush.  But we appreciate the constructive criticism that a lot of fans put out there and try to take on board as much as we can for our next performance.

JayneStars: For youths aspiring to pursue a music career, what is the best advice you can give them? Aside from musical talent, what other skills are necessary in order to “make it” in the industry?

Ji-hae: I think determination and perseverance are most important and people should believe that their dreams will come true if they never give up.  Even if it things don’t fully come together or materialize in the end, you would benefit from the journey and will not feel regretful later in life.

JayneStars: What is planned for Blush next?

Angeli: We were in Asia through October and opened for the Black Eyed Peas in Manila! We still can’t believe it happened; it was such an incredible experience for us all!

Currently, we’re back in Los Angeles. We love it here, especially the beach and the food.  We’re continuing with our school tours in California and will also be performing at clubs and charity events. Most importantly, we’ll be going to the studio to finish up our recording for our debut album which we hope will be released in the spring of next year.  In January 2012, we’re heading back to Hong Kong again to perform for our fans. We will be launching the Mandarin and Cantonese versions of our single, Undivided. We want as many people as possible to be able to listen to and understand our music.  So definitely watch out for these songs!

JayneStars: Blush, thank you for chatting with JayneStars.com! We wish you continued success and look forward to your music released in different languages!

Eight sets of Blush promotional merchandise will be given away to eight lucky winners. Please e-mail [email protected] to receive your free set! Eight winners will be chosen randomly. Deadline to enter is Friday, January 6, 2012.

Many thanks to Blush for providing the promotional merchandise to JayneStars.com for this giveaway!