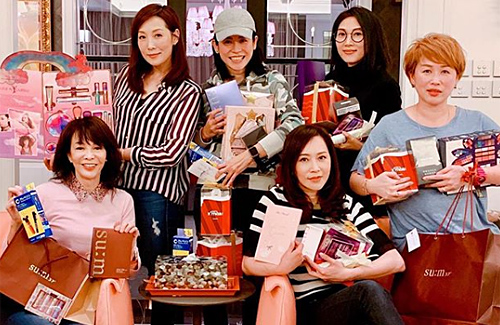 Carol Cheng (鄭裕玲) recently hosted a dinner party for her close celebrity friends, which included Melissa Ng (吳美珩), Jessica Hsuan (宣萱), Anna Yau (丘凱敏), Priscilla Ku (顧紀筠), and Annabelle Lau (劉曉彤). Carol shared a photo of the special event on Instagram and wrote, “This time was very special; let’s post this photo together! #Melissa Ng”. Since Melissa did not have an account on Instagram, Carol mentioned her through hashtag, which made her followers laugh.

But what is Melissa doing now? The 46-year-old former actress joined TVB after winning runner up at Miss Chinese International 1996. She portrayed many professional roles, and appeared in popular dramas such as Secret of the Heart <天地豪情>, The King of Yesterday and Tomorrow <九五至尊>, Healing Hands 3 <妙手仁心III>, and La Femme Desperado <女人唔易做>. Although her last drama with TVB was 2008’s The Master of Tai Chi <太極>, many viewers still remember her.

Melissa’s parents were both doctors and at the age of four, her family immigrated to the United States. In 2001, she married businessman Jerry Wang (王華麟) in Taiwan, but hid her marital status from the media until 2007, when she announced she was having a baby girl. Her husband comes from a rich family background, as the Wangs own various large businesses in Taiwan. Since his family has an estimated worth of 25 billion HKD, they are deemed to be one of the most wealthy families in Taiwan. In 2011, Melissa and Jerry welcomed the birth of their son.

Although no longer an actress, Melissa maintained her elegant looks. In 2015, she was rumored to star in Empress Legend <呂后傳奇>, but the reports were unfounded. Since Melissa wants to spend more time with her children, it may be difficult to see her return to acting anytime soon.

5 comments to Melissa Ng Meets with Carol Cheng and Friends