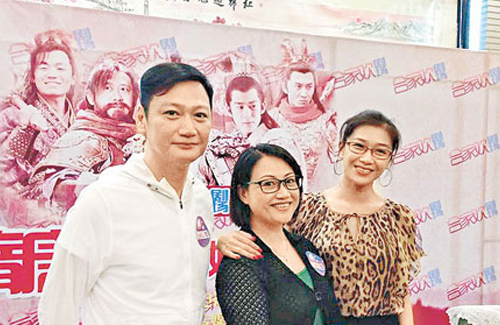 Michael Tao (陶大宇) and Angie Cheong (張慧儀) reunited for a voice over project recently, rekindling an old friendship. It has been nearly 14 years since their last collaboration, ATV series Showbiz Tycoon <影城大亨>, where they portrayed a couple.

This week, Michael and Angie met up to do the Cantonese dubbing for the 2013 mainland Chinese series Heroes in Sui and Tang Dynasties <隋唐演義>, a historical fiction drama produced by Yongle Film and Television. The series is slated to air in Hong Kong at the end of the month. Michael voices Du Chun’s (杜淳) role Li Shimin, who later becomes Emperor Taizong of Tang. Angie voices Michelle Bai’s (白冰) role Xiao Meiniang, the wife of Emperor Yang of Sui. As both roles are pivotal characters in the series, Michael and Angie spent the majority of the past few weeks in the recording studio.

“I would be reading my script all day,” said Michael. “I don’t think I’d be able to handle it if I didn’t have as much breath. To take care of my voice, I would drink some honey before starting work.” However, Michael said his biggest achievement was the fact that he had quit smoking. “Now I’m not as out of breath so I have no trouble using my voice to act!”

Though the two do not share many scenes in the drama, chemistry sparked once they came together. Angie shared, “There was this one scene where I was pushed to the ground, and Michael immediately helped me out with a reaction. The results were great!”

After completing that day’s recording, Michael met up with Angie to catch up over the lost years. Angie told Michael that she has a business in mainland China and has also adopted a son. Michael said he is very proud of Angie’s accomplishments and how she survived on her own. The two took a selfie together for memories.

“Voice over work is not that difficult, and it’s fun to do occasionally,” said Angie. “Michael and I could only meet after we are done with our work for the day. We would eat meals together as a big group with our staff and catch up. We haven’t seen each other in many years. We have many things to talk about!”