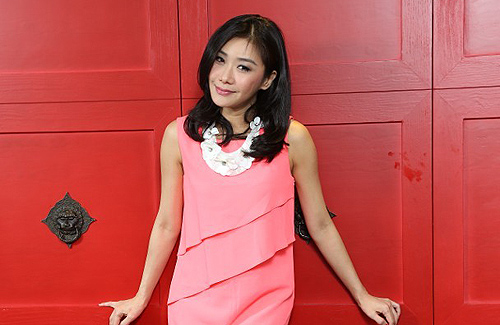 After winning the Miss Chinese Malaysia Pageant in 1992, Angie Cheong (張慧儀) signed with TVB and entered the entertainment industry. With her sultry appearance and feminine figure, Angie soon became a showbiz sex symbol and also starred in many memorable roles. However, Angie left the entertainment industry after suffering noticeable injuries as a result of domestic violence from her ex-boyfriend in 2003. It was not until 2014, when her good friend Eric Tsang (曾志偉), invited her to film for the comedy series, Never Dance Alone (女人俱樂部), did Angie resume her presence on television.

Angie is ready for a new start, as the 43-year-old actress has many new projects coming up. Due to her busy schedule, Angie has decided to have her adopted son, Hanson Cheong (張晃維), return to Malaysia to live with her parents. “Filming is very exhausting. I want to give my son a stable life. My son said he would rather live in Malaysia, because that is where our home is. So it is best for him to live with my parents. As soon as I am done with work, I will go back to visit him!”

Already 13 years old, Hanson has matured a lot and is extremely thoughtful towards his adoptive mother. Angie shared, “Every time I wake up to use the restroom at night, I would check up on him and give him a kiss on the forehead before going back to bed. One day, he did what I did and came to look at me and give me a kiss! And sometimes when I cook dinner for my son, I would eat the leftovers from the previous night. He would tell me to eat the freshly cooked food. After we are done eating, he would wash the dishes too. I feel so blessed!”

Recently breaking up with Chinese businessman Chen Wei Jun (陳偉軍), Angie admitted that she currently has pursuers, but is in no rush to start a relationship. “My son just hit puberty. How I handle my love life will affect his future outlook. I don’t want him to think that his mother is casual [when it comes to relationships] or that he can be casual with relationships.” When asked whether she will ask seek Hanson’s approval before dating, she said, “If I am able to meet someone who genuinely loves and cares for the both of us, I’m sure my son will be accepting of it.”

Despite being a sex symbol in 90s, Angie hopes to achieve new heights in her career and leave her sexy image behind. “In the coming days, I will be portraying a woman with a past and has experienced heartache in an internet film. My age and state of mind are different now. I want to portray characters with a past and something more down-to-earth, like a stepmother, a mother, a corporate businesswoman, or a dean of an orphanage. Unlike before, where my roles were only just sexy!”

In addition to reestablishing her acting career, Angie also has plans to release a book, in which she shares the difficulties she faced with running her own business and her experiences as a single mother. “I want to write about the time from 2003 to 2013, when I was pioneering my business. I went to have coffee to discuss business with the President of a large chain hotel by myself. In the end, it was a successful collaboration and was an inspirational experience. During that period, someone said I shouldn’t be doing these kinds of things as a celebrity. It made me feel very upset. Usually, I carry an air of sexiness, but I’m still able to adapt and survive in a foreign place. The more difficult something is, the more you’ll need to be brave. Continue to work hard and don’t be afraid of trying new things. This will be the best lesson I can teach my son.”