TVB is back with another big period drama production nearly 10 years after the original hit.

2009’s Beyond the Realm of Conscience <宮心計>, which starred Charmaine Sheh (佘詩曼), Tavia Yeung (楊怡), Moses Chan (陳豪), and Kevin Cheng (鄭嘉穎) was a record-breaking hit when it aired in Hong Kong and throughout Asia, putting the lead stars back on the map. Its producer Mui Siu-ching (梅小青) is now back with Beyond’s sister production Deep in the Realm of Conscience <宮心計2深宮計>, which is set to premiere on May 21, 2018. 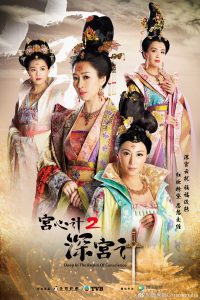 Deep in the Realm of Conscience is set during the reign Li Longji, also the Emperor Xuanzong of the Tang Dynasty. It stars Steven Ma (馬浚偉) as the emperor, who is dealing with a power struggle with his aunt Princess Taiping, portrayed by Alice Chan (陳煒). The Emperor has always been in love with his wife Empress Wong, portrayed by Nancy Wu (胡定欣), but circumstances tear them apart. Director Ben Fong (方俊華) praised Nancy for her professionalism while filming the show, saying, “There was a scene where she had to cry, but because we had to use other cameras, she had to hold her tears for a good six to seven minutes. Once we shouted ‘roll camera’, she cried out just like that. No wonder she is TV Queen.”

In her first TVB drama Chrissie Chau (周秀娜), who would not appear until episode 18, plays Consort Cheng. Under Taiping’s orders, Consort Cheng tries to depose Wong from power by winning Xuanzong’s favor.

On the other side of the spectrum is the touching love story between General Yam, played by Kenneth Ma (馬國明), and the court maiden Kam Yeuk-chin, played by Jacqueline Wong (黃心穎). Yam was originally in love with Wong and is also her personal guard, but he eventually falls in love with Yeuk-chin’s kind heart. Producer Mui Siu-ching called Jacqueline “the next Linda Chung”, describing, “She plays a very adorable character. She wants to find true love and she’s not shy about it.” 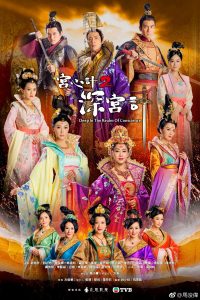 Another side of the coin centers on Annie Liu’s (劉心悠) character, Yuen-yuet. Similar to Charmaine’s character “Sam-ho” in Beyond, Yuen-yuet is a palace maid serving in the palace’s furnishing department. She enters the palace in hopes of finding her older sister, but gets warped into the dark side of politics. She romances General Ho, played by Edwin Siu (蕭正楠). For her role, Annie studied Cantonese and diligently practiced her lines with her friends and study mates.