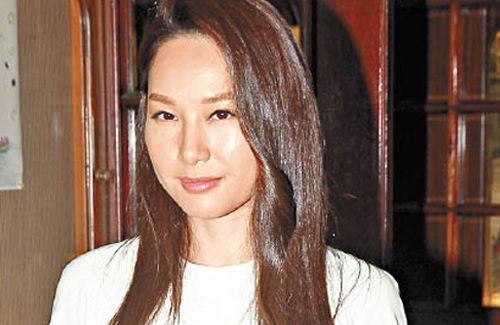 Ex-TVB actresses Kate Tsui (徐子珊) and Angie Cheong (張慧儀) recently made an appearance and attended a book donation event. Since ending her contract with TVB last year, Kate has been absent from the small screen and shifted her focus to launching her new jewelry collection.

Despite her desire to try out different things, Kate expressed that she does not have any plans to release a book. She admitted, “My [jewelry] website is giving me a headache. There are many things to worry about. After all, it relates to the jewelry field and involves online transactions. It’s also my first time managing a business, so I want to play it safe.”

After a one-year hiatus from filming, Kate finally decided to sign with Wong Cho Lam’s (王祖藍) company, which is affiliated with Shaw Brothers. “Afterwards, I will start paving the road for new filming projects. I will have more opportunities in Mainland China. Wong Cho Lam has a lot of connections in Mainland China, so he will help me expand my market there.” Since Wong Cho Lam is known for his witty reality television shows, Kate does not deny the possibility of participating in one. “It doesn’t really matter. I’ve never tried it, so I may do so. But I think they will help me prepare for it, since they know I’m don’t cope very well with harsh circumstances.”

On the other hand, 42-year-old Malaysian beauty, Angie, revealed that she intends on releasing an autobiography. Angie shared that she has already recruited a good friend and novelist to help her document her life with her son, as a means of preserving their memories together. When asked whether she will be filming soon, Angie said, “Currently, I have plans to guest star in two movies. Then in August, I will be filming a modern series in Shanghai.” On whether she will have any filming projects in Hong Kong, Angie said, “I will consider it if there is something suitable for me in Hong Kong. TVB is my mother station, so if there is something fitting, I will definitely consider it.”