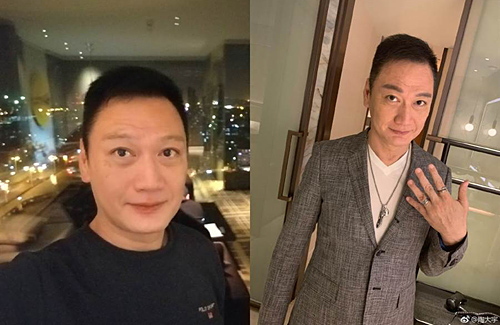 This is a second marriage for the actor, who starred in classic dramas including Flaming Brothers <纵横四海> and Detective Investigation Files <刑事偵緝檔案>. Unable to survive the marital seven-year itch, his marriage with designer ex-wife Wong Wai Bo (黄宝慧) ended in divorce due to rumors with co-star Sonjia Kwok (郭羡妮) on the filming set of police-themed drama On the First Beat <学警出更> in 2007.

After the divorce, Michael had at one point resumed warm ties with his wife, and even dissed Sonjia by saying he was “not surprised” that the actress had been embroiled into the “Four Top Lewd Actresses” rumors back then. “I’m not the least surprised, do you feel surprised? It’s only normal that everyone’s not surprised,” he had infamously said back then. His comments about his Sonjia shocked the industry and sent his reputation and career spiraling downward.

According to Hong Kong press, Michael’s career hit rock bottom due to it, while his partner, who works in publishing stayed by him through 10 years together. Recently, news spread of the pair’s nuptials, supposedly to fulfill the wishes of Michael’s mother, though the actor has yet to respond to this.