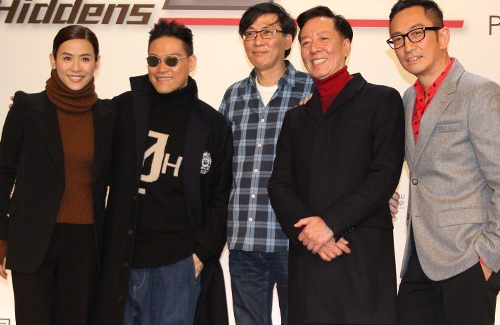 Producer Gary Tang (鄧特希), known for creating TVB’s The File of Justice <壹號皇庭> and Healing Hands <妙手仁心>, has called back some of his frequent collaborators for his upcoming crime drama, The Hiddens <隱世者們>. The series stars Lawrence Ng (吳啟華), Michael Tao (陶大宇), Jessica Hsuan (宣萱), William So (蘇永康), and Japanese actress Naomi Watanabe (渡邊直美), and is a collaboration between Japan and Malaysia. Filming began in October of last year.

Lawrence and Jessica attended a press conference for The Hiddens in Macau earlier this week, but the drama’s other main lead, Michael, was absent. Jessica joked that Michael was avoiding Lawrence, prompting Lawrence to quickly clarify, “She’s joking! We are all collaborating well and I would never think about comparing screen time!”

The organizers then showed a video Michael had shot for the press conference. The former TVB actor said he was unable to attend the conference due to his schedule, but expressed his excitement at working with Lawrence and Jessica. He added that he is looking forward to shooting a bed scene with Jessica, joking that he will perform vividly and be in his best shape. “Get ready, Jessica Hsuan,” he said with a laugh.

In a later interview, Lawrence clarified once again that Jessica was only joking about their discord, and that he and Michael are getting along. “We’ve always been friends. We were training class classmates. We just didn’t really get the opportunity to really collaborate until now.”

Although filming has been smooth, the actor admitted that the cast and crew are still getting last-minute scripts and rewrites, which has always been Gary Tang’s style. “But we’re all used to this,” said Lawrence. “We’ve communicated well. I’ve been filming like this for many years, and if I do have a completed script on hand, it’d feel weird.”

Jessica, on the other hand, admitted that the last-minute scripts are stressing her out. “I’m older now, and my memory is not as good as it used to be.” On her upcoming bed scene with Michael, Jessica said, “I don’t know how long it’s going to be, but since my partner is Michael Tao, then everything’s going to be okay.”