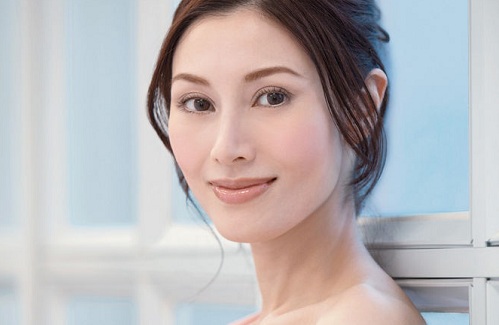 Since January, Michelle Reis (李嘉欣) was rumored to be pregnant with her second child. Her increasingly plump figure over the past several months suggested that the 41-year-old was pregnant once again. However, the latest edition of Oriental Sunday claimed that Michelle had miscarried in April. Her former belly bulge also mysteriously dissappeared!

After marrying Hong Kong tycoon, Julian Hui (许晋亨), in 2008 Michelle continued to take on sporadic jobs, endorsing various luxury brands at promotional events. Giving birth to son, Jayden Max, in 2008 did not halt Michelle’s work habit. Michelle’s frequent public appearances thrust her in the media’s limelight, who happened to notice that her belly mysteriously grew and then disappeared over the last 5 months!

Michelle Reis Had Carried a Girl?

In January, when Michelle had attended a promotional event, she wore flat shoes and was carefully supported by staff members when she climbed onstage. It was rumored that Michelle had been carrying a “Little Dragon Girl,” but Michelle laughed off the media’s reaction as being too sensitive.

In February, Michelle and her husband, Julian Hui, attended a horse racing event in Happy Valley. She wore a loose dress and coat, which masked an increasingly plump figure. The following month, Michelle reported had a medical checkup at the Hong Kong Sanatorium & Hospital. Flanked by bodyguards in her evening appearance at a promotional event, Michelle’s pregnancy rumors continued to grow.

In April, Michelle appeared at the Shanghai airport. She lost noticeable weight and her stomach was flat. It was speculated that Michelle may have miscarried her baby last month. Asked about her pregnancy, Michelle responded, “I have said many times in the past, but no one believes me! Right now, I truly do not intend to have a second baby!”

On Mother’s Day weekend, Michelle was once again asked about her pregnancy. She turned sour-faced and sad. It was speculated that it was tied to her alleged miscarriage.

Michelle’s manager, Chan Sin Chi (陈善之), refused to comment on her miscarriage rumors. He said, “The tabloids can write whatever they wish. We will not respond.”

Jayne: Miscarriage happens more than women think. I wish Michelle a speedy recovery if it did happen to her. She is still young, so she can try again!