At what age does it start to become weird for children to take baths with their parents?

A few days ago, 23-year-old Japanese television presenter Naomi Kitami (北見直美) trended when she revealed on a variety show that she still takes baths with her father and three older brothers. She even allowed the program to film their bathing process at their home.

Naomi first bathed with her 26-year-old older brother for an hour. The siblings chatted and watched videos on their phone. About an hour later, Naomi’s brother left and her father joined. There was no awkwardness in the transition, and the father-daughter duo comfortably chatted. Naomi admitted that even her friends found it weird, but she explained that she is very close with her family, and that bathing together would save time and money. Bathing with her family is a time for her to relax and spend time with them.

Of course, Naomi’s bathing habits have garnered mixed responses from netizens, leading to interesting debates. This news has also made it over to Hong Kong, where celebrities gave in their two cents.

Bob Lam (林盛斌) had similar thoughts, expressing that he has never showered with his three daughters, even when they were toddlers. “My wife and I would always tell them that we need to protect our bodies.” Candy Law (羅霖), who has three sons, said, “I’d take baths with them even up to four years old, but as they grow older, they have to understand the difference.”

Wayne Lai (黎耀祥) was more open-minded. “It’s a difference in culture,” he said. “There are mixed gender onsen in Japan, and that is a culture that was built overtime. We don’t have something like that, which is why we probably think it’s very weird.”

Last year, Kay Tse (謝安琪) revealed that she and her 11-year-old son James Cheung (張瞻) would sometimes shower together, in which she would use that opportunity to teach her son the difference between a male and a female, and how to respect each other’s bodies. Some netizens believe that Kay’s ways of teaching as too extreme, and that many kids as young as 6 years old have already learned to take their own showers. 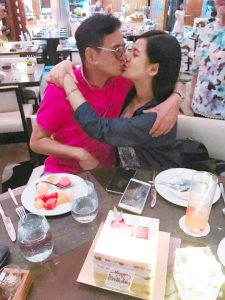 n 2014, Michelle Reis (李嘉欣) uploaded a photo on social media of her taking a bath with her then 3-year-old son Jayden. Michelle was wearing a bikini in the photo. Netizens wondered why Michelle had to wear clothes in the shower, to which Michelle replied that it is important for her son to understand the difference between male and female, and that she does not want to negatively impact her son’s psychological health.

Though not a bathing scandal, TVB actor Joseph Lee (李國麟) had been under fire for acting too intimate with his daughter. In 2017, on his daughter’s 15th birthday, he shared a picture of him kissing his daughter on the lips. Netizens left behind comments of disgust, but Joseph reasoned, “My daughter is kissing her father. In my eyes, it is filled with a father’s love.”