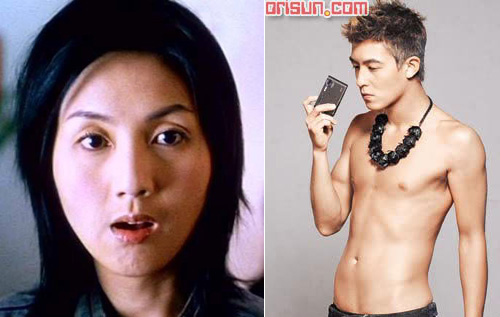 The discovery of Edison Chen (陳冠希) dating 16-year-old model, Cammi Tse (謝芷蕙), caused an uproar in the entire city of Hong Kong! The press asked Edison’s godsister, Miriam Yeung (楊千嬅), why he had to take intimate photos with each of his girlfriends and whether it was necessary for him to see a psychiatrist. Miriam refused to comment on Edison’s controversial behavior, only noting, “Adults have their own ability to judge! It’s inappropriate to comment on his behavior.”

Miriam Yeung: “I Haven’t Seen Edison in a Long Time!”

Appearing at a promotional event, Miriam Yeung stated that she was unaware of the release of Edison’s kissing photos with Cammi Tse. Miriam said, “I have not seen the photos, so I will reserve my comment!” In addition, Miriam said that she has not seen Edison for a long time and they did not maintain in contact. Asked whether she will advise him to be careful in the women he chose to date going forward, Miriam said embarrassedly, “I rarely ask him about love matters!”

Regarding the new leakage of Edison’s intimate photos, Mag Lam (林欣彤) indicated that she knew how to protect herself. She will not take any intimate photos and professed that her previous boyfriends did not request her to wear a school uniform in the photos. Mag said, “Even if they had such requests, I would not agree in taking the photos. The request to take a photo [in school uniform] is quite odd! I will not easily fall into someone else’s ploy!” (What are your boundaries?) “It’s okay to take a photo cheek-to-cheek, but definitely not with tongue contact!” (Do you think that Edison has a sexual perversion?) “I will not judge whether he is right or wrong. Anyhow, I will not take such photos! If I do not wish to be attacked, then it’s necessary to be careful!”

Appearing at promotional event, Nicholas Tse’s ( 謝霆鋒) fathter, Patrick Tse (謝賢) was asked to comment on Edison Chen and Cammi Tse’s intimate photos. Patrick retorted angrily, “Do you want me to slap you? You want me to comment on people like him?” Asked whether he wished Nicholas would quickly find a girlfriend, Patrick said jokingly, “You’re crazy; that’s his own business. Do not ask such silly questions!” Jayne: I thought Mag Lam responded quite well regarding the taking of intimate photos. Girls, be sure to do the right thing!

I apologize if the header photo bared too much of Edison’s torso, but I found him holding of a camera very fit for the subject of the article.