Cammi Tse: Not a Girl, Not Yet a Woman; “I Love Edison Chen for His Maturity!” 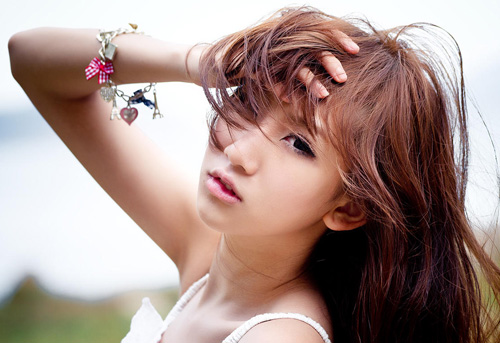 It has been five months since 17-year-old model, Cammi Tse ( 謝芷蕙), became an overnight celebrity after her lip-locking photos with Edison Chen (陳冠希) surfaced. Everyone wanted a piece of Cammi, to find out more about her forbidden romance with Edison, which was marked by a 15-year age gap. Cammi Tse represented a “guilty pleasure” for adults, who while shocked by the alleged sex rumors, could not help but watch with perverted enthrallment as the teenage Cammi was about to leave innocence behind forever and enter adulthood. A larger world of fame, money, and temptation loomed over Cammi, whose intimate love life was a catalyst for the world’s attention upon her now.  Will Cammi remain a one-time curiosity or was she ready to become a bigger star in her own right?

Not A Girl, Not Yet A Woman

Cammi Tse represented a contradiction. Despite her youthful school girl image, she also possessed a temptress reputation in her romantic rumors with Edison Chen and alleged involvement with TVB actor, Vincent Wong (王浩信) prior to his wedding. In Cammi’s modeling and self-taken photos, she often possessed a wide-eyed look (complimentary of circle contact lenses), pouty lips, and long, girly bangs. Pink was her favorite color. Despite her innocent appearance, there was a budding sexuality in her, namely found in recent photos where she rolled in bed in her pink boy-shorts underwear.  Aside from the widely-circulated kissing photos taken on Edison’s bed, Cammi was rumored to be the subject of more explicit nude photos and video clip, where a young woman was seen giving oral sex to an unknown man. The video clip had circulated online last November.

Cammi denied several times that she was the girl featured in the oral sex clip. “Of course that was not me! I felt it was very funny that people said that the girl looked like me, because she does not resemble me at all! I did not look see the video clip. I wanted to search for it, but could not find it.” She protested again, “It looks like a screencap from a video. That was not me!” Cammi also denied that she was not the nude woman featured in tabloid photos.

The baby-faced 17-year-old was frequently criticized as to being too plain-looking. Cammi admitted that she lacked confidence in her looks, but felt that it was necessary to be able to accept criticism as a model and actress. Cammi said, “Actually, I do not have much confidence in myself. When I look in the mirror and smile, I feel awkward. I feel that I do not look good when I smile. But if I did not smile, then I look worse! I have my own contradictions. Perhaps other people have criticized me frequently, thus I think that I do not look good. I do realize that this is a terrible shortcoming in this line of work, so I am trying to change myself.”

Cammi admitted that she has already dated three times, in which Edison Chen was one of her ex-boyfriends. Further details of her love life will be revealed in an upcoming autobiography, to be released later this year. Asked why she had dated Edison, Cammi said, “Because I liked him, so we were together! It is a very natural feeling.” Cammi admitted that Edison was very attentive towards her, but did not choose to elaborate further on the details. Asked why she was attracted to Edison, Cammi said, “I don’t know. When I fall in love each time, I just consider my feelings about the person and wish to be with him!”

Since Cammi had already started working while still a student and seen more of the world, she felt that boys who were the same age as her were immature. “Actually, I feel that every man can be very immature. However, their mentality will allow them to act maturely during the appropriate situations. Asked whether Edison showed his maturity by being attentive to her, Cammi said, “Yes.”

Tabloids reported earlier that Cammi had given her virginity to Edison, while days later she denied the allegations. Cammi stated, “Of course I have to deny this because I never made such a statement! The implications were too serious; my family was stunned!”

Despite her youth, Cammi was already convinced that all men cheated in relationships. “Even if a man loves his girlfriend very much, he will be unable to resist temptation and cheating. Perhaps I am a Pisces, thus I often struggle with this issue. Perhaps I will possess the same attitude as some women, by telling myself, ‘Let it go! It will be okay when I go home,’” Cammi laughed.

Cammi’s recognition levels soared after her intimate photos with Edison were released. Job offers were showered upon her. She hosted numerous variety programs on subjects such as a makeup and supernatural matters. A mainland China producer was interested in casting Cammi in a 40-episode drama where she will have a major role.  Advertisers were willing to pay the model over $10,000 HKD per promotional event appearance, which was a twenty-fold increase from her old fees.

Cammi even received a style award from a mainland Chinese media company in 2012. She will be releasing a pictorial and autobiography later this year. Notoriety or celebrity, it was clear that Cammi was heavily in demand, making an envious salary for a 17 year old.

“My Family Was Upset I Had Dated Edison”

After Cammi’s intimate photos with Edison surfaced, her father erupted in anger. Mr. Tse was not aware that Cammi had been dating Edison for months until he saw her photos in the newspaper! Her family was very upset and they did not talk to Cammi for a period of time. “At the time, I was alone, without anyone to help me. I was very helpless. Fortunately, they are my family and will support me. I clarified many issues with them, that [my relationship with Edison] was in the past. I told them that there were no such nude photos as claimed by the media.”

Cammi stated that her family was most angry about her dating Edison. After she explained that the relationship was already in the past, they supported her in the end. “They understand my hurt and pain. At the time, my family suffered as well.” She added that her family trusted her that she was not the girl featured in tabloid nude photos.

The aftermath of Cammi’s scandal with Edison continued to reverberate in her current life, making it necessary to change schools. “After the scandal, many students’ parents called the school to complain. Reporters called my school to ask questions about me. The school was bombarded by many problems; I gave them a lot of trouble.” Cammi added that some of her classmates were kind to her, while she tried to remove herself from the complaints. Although her modeling and acting opportunities were increasing, Cammi wished to complete her high school education.

When Cammi hosted a variety program earlier, an audience member dialed into the program, attacking Cammi for her poor hosting skills and unattractive appearance. Unable to withstand the humiliation, Cammi burst into tears. Reflecting upon the incident, Cammi had visibly calmed down. “At this time, I wish to let go. Many people do not like me. But I also think, when many people do not like me, it is time for me to prove myself to them. I can rely on my efforts to work hard and hope that they accept me. The complaint call into the variety program was live. My heart beat very fast. I panicked and did not know what to do. My heart was torn, thus I could not hold back my tears. When it was time for commercial break, I went away….

Despite a moment of weakness, Cammi quickly gathered herself. “At the time, I thought of thanking him. It is due to such unpleasant experiences which allow me to slowly mature.” Whether people scolded Cammi for her plain looks or alleged sexcapades, the “child-woman” possessed a strong survivor instinct allowing her to weather the aftermath of her scandal with Edison Chen.

Jayne: Cammi Tse looks like a young girl, but seems to be older beyond her years. She is already pessimistic about love and men’s cheating habits in relationships. Aside from a few tearful bursts in the past, her interview responses are well oiled, giving details and dodging them vaguely when she wishes.

She realizes the public’s strong negativity towards her, but that will not stop her from chasing her dreams of becoming a star. Cammi seems to know the rules of the entertainment industry well already.

61 comments to Cammi Tse: Not a Girl, Not Yet a Woman; “I Love Edison Chen for His Maturity!”