Once known for his killer mixed looks which had both men and women swooning, actor Edison Chen (陳冠希) is already a 41-year-old father of one. Recently spotted among the audience at a basketball game with his wife and daughter, Edison acquiesced to a fan’s photo request, but netizens were shocked at how much he has aged since his prime! 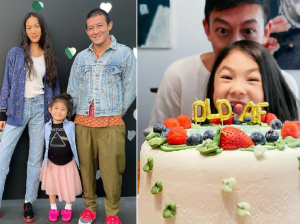 The actor had settled down in Los Angeles after marrying Chinese supermodel Shu Pei Qin (秦舒培) in 2017 and the couple has a daughter named Alaia. Catching a B-ball game with his family, they posed for a friendly photo when Edison spotted by a fan. In the photo, he could be seen dressed in a long-sleeved Chinese-style top and khaki pants, with greyish white hair and visible crow’s feet, looking very much the fatherly figure.

Seeing the photo, fans were aghast at how time has ravaged Edison’s once swoonworthy looks, commenting that “Even (he) has gone the way of Zhao Benshan (趙本山)”! 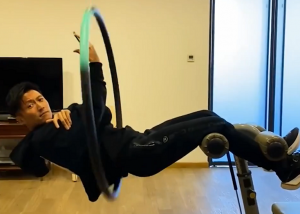 Comparing Edison’s looks with that of Nicholas Tse (謝霆鋒), who is also aged forty-one, some pointed out how Nicholas has admirably retained his youthful looks and even his physique, as a recent Douyin video of him attempting a trending mid-air feat with a hoola hoop wowed fans with his amazing core strength. While most surmised that Nicholas’ regular lifestyle might have contributed to his youthful looks, some came to Edison’s defense, claiming his looks were only age-appropriate, and that he was “still good-looking” in his own way.