With the non-fungible token (NFT) trend gaining traction in recent years, many Hong Kong artistes have been quick to jump on the bandwagon and see it as an income source, despite the risks involved. Among them is actress Joey Thye (戴祖儀), rumored to have earned $5 million Hong Kong dollars from an NFT investment she made with her friends.

Launched in February, Joey invested in an Alpaca NFT which sold out in 15 minutes. Since she claims to be only one of the investors, Joey clarified that the HK$5 million would not be entirely hers for the taking, crediting the developers for the earnings.

Launched in end of January on peer-to-peer NFT marketplace OpenSea, “Who Is This Boy” series featuring an egg-shaped character in various renditions such as different animals, famous persons and popular cultural references, have earned the favor of many Hong Kong celebrities.

To increase its attraction, “Who is the Boy” added a searching gameplay mechanism. Users who have collected specified NFT within the nine game worlds in 100 days stand a further chance to win 40ETH, with its value soaring to almost HKD10 million at one point, hence gaining wide attention. 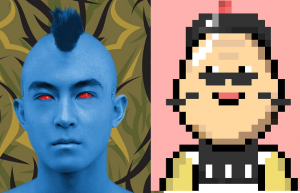 Edison Chen (陳冠希) has likewise jumped in, issuing his first “NVLPE Series Collection 01”, a Chinese New Year-inspired project which featured 8,888 digital artwork pieces across eight different fields including international tattoo artist Dr.Woo, The Heart Project x Emotionally Unavailable, and fashion label CLOT. However, sales kicked off to a chaotic start due to technical difficulties which left buyers waiting for their purchases – leading to moderators rushing to appease and apologize to them.

Other Hong Kong artistes jumping on the trend include Chilam Cheung (張建聲), Alex Fong (方力申), Judith Kwong (鄺潔楹) and Rainky Wai (蔚雨芯). While investing in cryptocurrency carries its risk, the celebrity interest in NFTs looks to continue for some time.