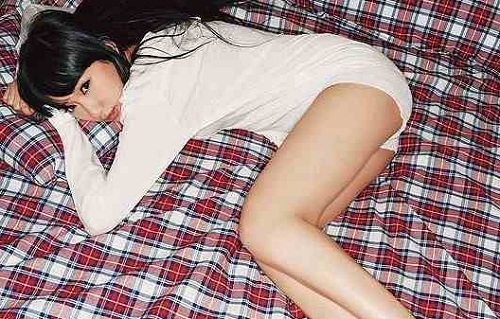 Recent rumors surfaced that Edison Chen (陈冠希) may be back together with 17-year-old model and school girl, Cammi Tse (谢芷蕙) ! At the end of February, a witness spotted Cammi leaving Edison’s apartment. This fueled speculations that the pair re-ignited love sparks despite publicly stating that they had broken up last November. In addition, Cammi will be releasing her autobiography later this year, in which she is expected to reveal torrid details of her relationship with Edison!

A Predatory Relationship Frowned Upon

In November 2011, Edison and Cammi’s kissing photos surfaced widely. It was speculated that Cammi may have released the photos herself, in order to gain publicity. Since Cammi was only 16 years old at the time, public outrage ensued that 31-year-old Edison was nearly robbing the cradle! Concerns arose as to whether the pair had sexual relations and whether Edison may have slept with an underage Cammi. Eager to deflect the scandalous rumors, Edison announced that he and Cammi had broken up.

The public was shocked to learn that Edison and Cammi may still be secretly seeing each other. Cammi had revealed that Edison did not wish to go out when they were dating. Their past dates took place at his home, on his bed. In fact, the intimate photos that circulated last year showed Cammi and Edison’s naked shoulders, taken on Edison’s bed.

Regarding the rumors that he was back together with Cammi, Edison denied the allegations at a fashion promotional event appearance in March. Edison claimed that he has been single for a very long time.

In February, photos of Cammi Tse in pink panties were leaked on the web. Cammi lay sprawled on her bed wearing striped boy-shorts, in various suggestive poses. The photos showed the curve of her bottom and legs. The photos went viral and Cammi was again back in tabloid news headlines.

Capitalizing on the intense public interest, Cammi will be releasing an autobiography later this year. Cammi stated that she will write about “the romantic stories of a teenage girl, regarding past dating relationships with ex-boyfriends.” No doubt, Cammi will be writing about her relationship with Edison Chen!

Although Edison’s nude photos have leaked in 2006, none of Edison’s previous lovers have dared to comment on his bed skills. After the public saw Edison’s most private parts, perhaps they were eager to hear about his bed skills as well!

This was not the first time in which a Hong Kong actor’s love life was exposed in a tell-all for money. In 2004, Andy Lau’s (劉德華) Taiwanese ex-girlfriend, Yu Ke Xin (俞可欣) released an autobiography, revealing that she and Andy had sexual relations months after meeting each other. The pair signed a marriage certificate 27 years ago and spent 6 months together living the life of a husband and wife.

Regarding Andy’s love making skills, Yu Ke Xin was full of praises, writing, “He (Andy Lau) was like a dragon. In this aspect, he truly gave me a lot of pleasure many times!” Jayne: No doubt, celebrities’ bedroom stories have a huge market. The question remains as to the amount of bedroom details to be exposed in Cammi’s autobiography regarding her relationship with Edison Chen.