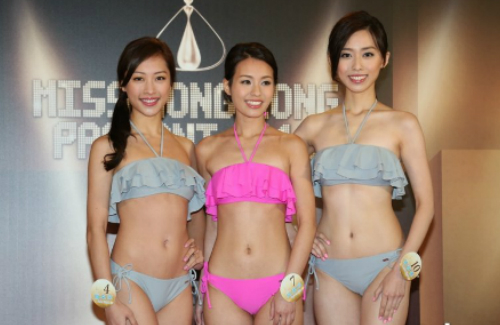 The 12 chosen finalists for the 2015 Miss Hong Kong Pageant stood next to a swimming pool and posed for press photos in bikinis today for the first time. Although the swimsuits this year are considered rather conservative as the design covered the girls’ cleavage, they still showed off their slim and curvaceous figures.

Contestant #1 Louisa Mak (麥明詩) has been a hot media favourite since the start of the pageant due to her sweet looks and impressive academic background. However, she faced an unpleasant mishap on the day of the bikini photo-shoot, as it was pointed out that part of her lower-body pubic hair was exposed. Louisa appeared embarrassed and awkwardly expressed, “I’ll be more aware for sure. I’ve never experienced things like this in the past.” Contestant #6 Ada Pang (龐卓欣) added that they would provide mutual reminders next time.

Many of the contestants claimed that Ada has the best figure among all of them. In response to the praise, Ada remained humble and expressed that she exercises regularly to maintain good shape. Speaking of how the swimsuits this year are too conservative, Ada remarked, “I know, but we’ll have more chances [to wear bikinis] later on.”

Although Ada and Louisa are both the media’s hot picks, the girls expressed they are great friends instead of rivals. Louisa exclaimed, “Miss Hong Kong is a life journey. We only need to compete with ourselves.”

Contestants #2 Jessie Ma (馬詩晴) and #6 Hayton Ng (吳慧堯) are the heaviest among the rest, weighing 121 pounds and 119 pounds respectively. Jessica is also said to possess the fullest chest. She laughed and expressed, “We’re all about the same, and I think everyone is okay. I only look a bit fuller because I’m chubby.”

Hayton, who was standing next to Jessie, added, “My bone structure is quite large, so I’ll look bad if I appear frail. Looking healthy is very important!” When asked if the girls think the bikinis are too conservative, Jessie expressed that the company has selected a very nice design.