The Mrs. Heavenly King, who married Aaron Kwok (郭富城) in 2017, is a full-time stay-at-home mother. She often shares tidbits of her life on social media, and as an Internet celebrity, her posts are well-received. On Chinese Valentine’s Day, Moka uploaded a photoshoot of her posing on a surfboard at the beach, but it wasn’t Moka’s impeccable style that had caught everyone’s attention—it was her surfboard. 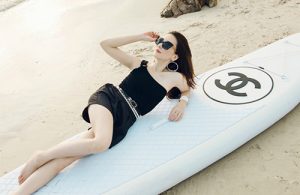 A huge Chanel logo was on front and center of the surfboard. It was the CHANEL Stand Up Paddle, released in 2018, and with a price tag of 157,100 Hong Kong dollars (approximately 20,270 U.S. dollars).

Obviously, the luxury surfboard isn’t the only Chanel thing that Moka owns. In a recent clip where she shared her favorite go-to sunglasses, at least seven of pairs she introduced in the clip were from Chanel. The sunglasses had price tags ranging from HK$3,000 to HK$6,000. Every pair looked different, suitable for Moka to mix styles for different occasions.

But despite Moka’s lover for designer brands, she is low profile and prefers a more down-to-earth style of life. Now a full-time mother caring for her two daughters Chantelle and Charlotte, Moka’s daily tasks include running errands for the family. Instead of using a chauffeur, she takes the MTR and taxi. She prefers dining at local cha chaan tengs than at fancy restaurants.