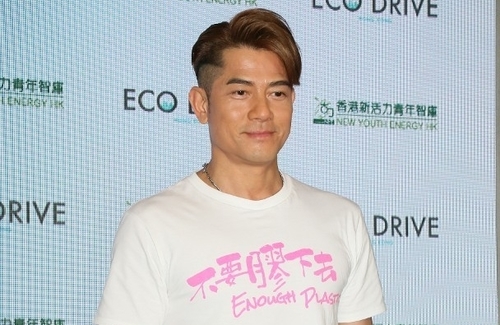 To support Hong Kong’s first “Enough Plastic” event today, Aaron Kwok (郭富城) made a public appearance for the first time since the birth of his second daughter in April. During an interview, the star could not conceal his joy of having both a toddler and a newborn. He revealed, “We’re still thinking of a Chinese name but her English name is Charlotte because we wanted it to start with ‘Ch’ like Chantelle, our eldest daughter’s name.”

Earlier, Aaron’s wife Moka Fang (方媛) divulged Chantelle was jealous of her little sister. Aaron smiled and admitted, “She gets jealous when I’m carrying the baby. I am still new to this and I’m learning slowly, but it’s OK, I pacify my eldest daughter.”

Although his hands are full, Aaron makes sure to show Moka love too. “She is a great mother,” he expressed. “She gave birth naturally both times, and the process was very hard and painful.”

He continued to disclose that he was in the delivery room with his wife during both times, and he even helped cut the umbilical cord. “I felt so happy, so blessed, and so touched witnessing the arrival of my daughter. It’s hard to express it in words,” the father of two said.

When reporters asked if they will try for a boy, Aaron firmly said, “As for whether we’ll have more babies, that’s something to think about in the future, but we won’t for now. In this generation, it doesn’t matter if it’s a boy or girl as long as they are healthy. I don’t know what it feels like to have a son, but I feel very blessed with two daughters. I witnessed my wife having a difficult time during the childbirth process, so I want her to rest first!”