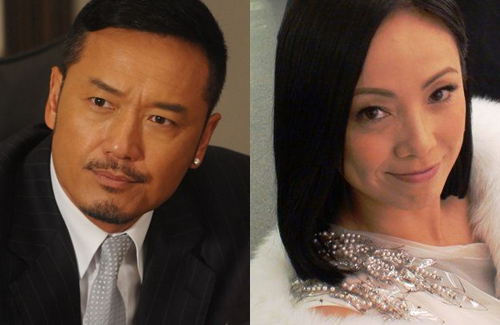 After four years, Ricky Wong’s (王維基) HKTV has still not received its official broadcast license. Meanwhile, he allegedly set his target once again at TVB artists, in hopes of having first-line actors join his station to create a stronger crew. Michael Miu (苗僑偉), Sheren Tang (鄧萃雯), Michael Tse (謝天華), and Fala Chen (陳法拉), were reportedly amongst the ones who were asked.

New TVB drama, Midas <點金勝手>, originally planned to star Bosco Wong (黃宗澤) and Michael Miu, but Michael turned down the offer last minute and said he had other things to do. According to tabloids, it was because he received an offer from Ricky. An insider revealed, “Michael returned to TVB in 2004, in hopes to film dramas for pleasure. Starting off as male lead, he soon dropped to second male-lead. He has not been very satisfied.” Since Michael’s good friend, Felix Wong (黃日華), has been blacklisted by TVB and joined HKTV, it should be easy for Felix to obtain a spot for his friend.

Michael was initially planning to finish filming Midas before leaving, but Ricky reportedly provided him with an opportunity to star in a grand production with Maggie Cheung (張可頤) next year. Hearing the news, he decided it was better to leave now. In an earlier interview, Michael expressed, “After all, I’ve been filming for so many years and have portrayed many different types of characters. Basically, I filmed one drama for TVB each year. They did thoroughly think about what kind of role to offer me, but I still think it’s quite hard. For instance, I’ve been participating in similar genres such as in The Academy <學警雄心> trilogy. I’ve portrayed a policeman many times. What else is there for me to do?”

Veteran TVB actress, Sheren Tang, was reportedly suspended by TVB earlier for publicly criticizing the production of Beauty At War <金枝慾孽II>. Due to the lack of completed and timely scripts, Sheren was involved in an angry exchange on Weibo with script editor, Chow Yuk Ming (周旭明). Her harsh criticism and complaints allegedly put TVB in rage. Now a “frozen” actress, HKTV was rumored to have taken this opportunity to ask her to join them instead.

On the other hand, Michael Tse’s TVB management contract came to an end a few months ago. Having been in the company for many years, “Laughing Gor” can be considered his breakthrough role. Unfortunately, Michael was unable to grasp the TV King title that year, and his chances in the upcoming years are slim. It has been reported that he does not plan to renew his TVB contract and is now deciding whether or not to join HKTV.

Fala Chen, who is currently brushing up on acting skills in New York, was also reported to have no plans of renewing her TVB contract. Earlier, Simon Yam (任達華) shared he spotted Fala meeting with Ricky. It was possible that Ricky was trying to persuade Fala to work for HKTV.

In addition, HKTV has also reportedly contacted Lynn Hung (熊黛林) and Jordan Chan (陳小春) for opportunities in their upcoming series.