Moses Chan: “Ada Choi Told Me Not to Like Her” 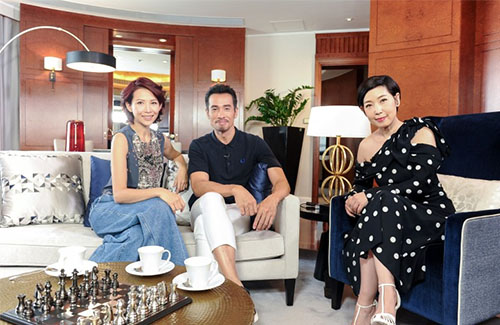 On the fourth season of Luisa Maria Leitao’s (黎芷珊) talk show Telling Maria <最佳拍檔>, old onscreen partners and close friends Ada Choi (蔡少芬) and Moses Chan (陳豪) teamed up to talk about their past collaborations and filming experiences at TVB.

The veteran TVB stars became close friends after collaborating in the 2002 TVB period drama Where the Legend Begins <洛神>. They frequently collaborated, working together on shows such as The Dance of Passion <火舞黃沙>, The Gem of Life <珠光寶氣>, Fly with Me <飛女正傳>, and Beauty at War <金枝慾孽貳>.

The very first word that Ada had spoken to Moses was, “Don’t like me!” Moses found Ada to be strange at first, but Ada clarified that she doesn’t enjoy being rumored with other costars, so she would tell all her male actors to not like her.

Where the Legend Begins was Moses’ first ever period drama. On recalling his experiences filming the show, Moses said he had committed many dialogue mistakes, sharing, “Once, I had over 30 NGs in one scene. It was to the point where Lau Dan (劉丹) even fell asleep in the end.”

Both Ada and Moses are not good at filming kissing scenes. Ada recalled a scene in Beauty at War where Moses and Sheren Tang (鄧萃雯) had to kiss, and while Sheren was really into the scene, Moses was as a board. Moses defended himself, saying that he is a “conservative, traditional Chinese man” who would not touch the opposite sex. Because of that, filming kissing scenes had always been his biggest fear.

Like Moses, Ada has always been a bit hesitant about filming kissing scenes. When she was first offered the role of Fly with Me’s Janet Bin, a woman who changes identities whenever she kisses a man, she made sure to tell the producer that she would only kiss the three male leads—if she needed to kiss anyone else, she would get a replacement.