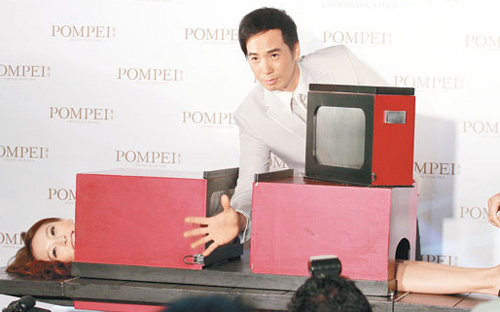 Earlier on, Moses Chan (陳豪) learned a few magic tricks for his new drama, War of the Heart <心战>. Yesterday, while attending an event, Moses performed a magic trick of sawing “Sexy Lips Model”, Jeana Ho (何佩瑜) and astonishingly, Jeana’s “rebounding chest” did not even move one bit during the sawing. After that performance, when Moses was asked about the other party’s figure, he exclaimed in a duo meaning tone, “Very amazing!”

Moses graced the opening of new fashion shop, POMPEI, in his capacity as a spokesman for their brand. Others seen at the event included famous model Mandy Lieu (劉碧麗) and Miss Chinese International 2010, Eliza Sam (岑麗香) who were both performing at the catwalk. Amongst them, the most eye-catching one was Jeana who was donned in a flowery mini-skirt and camisole which exposed nearly half her breasts. One of Jeana’s camisole straps even fell in front of the camera.

Not Afraid That Moses’ Saw Might Accidentally Cut Her Chest

After the fashion show, when Moses and Jeana were performing a magic trick of “Knife Sawing Beauty”, Jeana’s “rebounding chest” left everyone bewildered. Regardless of whether she sat, lie sideways or lay flat, the “rebounded chest” still  stood firmly, showing no signs of any movement, like something with no signs of life!

When the magic show had concluded, Moses was asked whether he was worried about accidentally sawing Jeana’s chest. An embarrassed Moses responded, “Earlier on when I was filming for War of the Heart, I managed to learn some magic so I’m not worried. Well, there were some techniques that must be acted out lahs.” (Were you afraid of touching Jeana?) “I was a little bit scared!” (Jeana’s chest was very amazing as it didn’t shift one bit hor!) “Hahahaha…the magic performance was indeed amazing lahs!” Asked whether how he felt about Jeana’s body, Moses quiveringly expressed that it was okay and said that he had judged quite a few during his judging stint for the Miss HK competition.”

Jeana smiled and said that while performing “Knife sawing beauty,” her chest was alright as she was only sawed at her belly button and she believed that even if there was anything wrong, Moses would definitely take up responsibility. When asked why her chest didn’t spill over, Jeana re-emphasized that she had worn a bra and used her hands to press and hold. Jeana immediately changed topic and said, “I really like Moses, he’s tall, well-built, handsome and also nice. I hope to have the opportunity to work with him again.” (Asked Moses for his phone number?) “Nope, it will be embarrassing to ask him upon meeting for the very first time. Probably next time when we have talked and got to know each other better. (Moses specially picks pageant winners lehs!) I also wrote a winning autobiography, wonder if that helps?” Ah K: The reporters made the whole event sound perverted and cheap, focusing mainly on this unknown model, Jeana’s chest. Though I do wonder why her chest didn’t move one bit but could it be due to the possibility of perhaps, breast implants?

Anyhow, I translated this article mainly due to Moses! Haha, he does get embarrassed and blush very easily (from earlier reports), doesn’t he? Uh-Oh, I’m not too sure whether Aimee Chan (陳茵媺) would be pleased if Moses had given his phone number to Jeana.

Moses’ learning of magic coupled together with his handsome looks makes a deadly combination! Well, his new TVB drama, War of the Heart opposite Adam Cheng (鄭少秋), Maggie Siu (邵美琪) and Aimee Chan, where he acts as a killer-cum-magician sounds quite interesting indeed. It sort of reminds me of the American crime series, “Dexter”, but this time Moses isn’t a forensic scientist but a magician. He will also have romantic kissing with Maggie, wonder how would that go down, will they look compatible on screen?