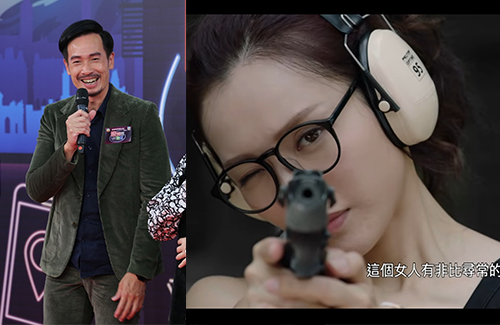 Ali Lee’s (李佳芯) screen time in the upcoming TVB drama Death By Zero <殺手> has become a topic of great interest, especially with the viral rumors that she has been frozen by the company.

This past summer, Ali was accused by mainland Chinese netizens for supporting Hong Kong independence after a social media post. Despite Ali’s clarification, many netizens threatened to boycott her. Rumors of Ali being frozen soon followed, and with the news that Ali will not be participating in the Legal Mavericks <踩過界> sequel, those rumors intensified.

In a new Death By Zero teaser released by TVB earlier this week, Ali briefly appeared for half a second. As the drama’s main female lead, the lack of Ali in the teaser caused great concern for fans.

“She seemed okay when we took a trip together earlier,” said Moses when asked about the rumor of Ali being frozen. “We did watch a copy of the teaser that the producer had sent us, and everything seemed normal. (Is it possible that the version you saw was different?) That’s definitely possible, but honestly, I think everyone had very little screen time in that teaser.”

In Do Do Midnight Quests, Moses traveled to Turkey with Carol Cheng and FAMA for coffee tasting. Despite the hectic schedule, it was still a very unforgettable experience for Moses, who is known for his love for coffee.

“I had the opportunity to experience the coffee culture in Turkey, and although I didn’t delve too deep into it, it was still a wonderful experience. The happiest moment was when I got to use my portable coffee tools to make coffee for the locals. Even the manager at the restaurant tasted the coffee with me.”