Since winning the TVB TV Queen title in December, Myolie Wu’s (胡杏兒) market value has increased dramatically. Numerous mainland companies fought to feature the new TV Queen in their filming projects. Recently, Myolie agreed to film a Hunan TV’s The Feast <金玉滿堂> for $5.4 million Yuan, doubling her price to $180,000 Yuan per episode. The Feast will be broadcast on the highly influential Hunan TV station, which also aired Bu Bu Jing Xin <步步驚心>, boosted the popularity of Kevin Cheng (鄭嘉穎) in mainland immensely. Perhaps Myolie will have to chance to become a new TV Queen gold magnet!

Unfortunately, Myolie’s agreement to film The Feast meant rejecting and offending other production companies.  Rumors circulated that a production company boss was interested in pursing Myolie. After he was rejected, he allegedly defamed her name. Asked to confirm the rumors, Myolie said, “I have never met the rumored boss reported in the news. There is no such thing! TVB will handle the series I act in.”

Asked whether Myolie will have time to film the mainland drama despite shooting Triumph in the Skies 2 < 衝上雲宵 II> in May, she noted, “TVB will help me. Work is the most important; it does not matter if it will be more strenuous for me!” Myolie possessed expectations for her new drama, The Feast, since it will be broadcast on Hunan Satellite TV, which has high market share and was highly influential. Allegedly, Myolie was invited to film mainland series, Palace <宮鎖心玉> as well. However, due to her filming TVB series, Curse of the Royal Harem <萬凰之王>, Myolie rejected the offer.

After a big roundabout, Myolie will finally be able to make an appearance on Hunan TV.  Myolie noted, “Several years ago, TVB and Hunan TV partnered in Strictly Come Dancing <舞動奇蹟>, in which I had participated in the dance competition. We worked together well. I look forward to my series being aired on this station!” 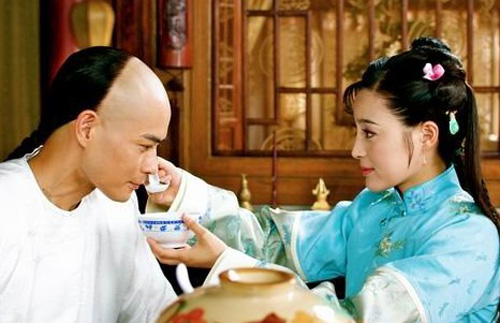 Kevin Cheng stars in mainland drama, “Mystery in the Palace.”