22-year-old singer and actress Nana Ouyang (歐陽娜娜) recently updated her social media with photos showing her close interactions with 24-year-old actor Zhai Zilu (翟子路) who had collaborated on her new music video. However, fans thought the star was going official and suspects that she has a new romance!
Media Capture Him at Her Home 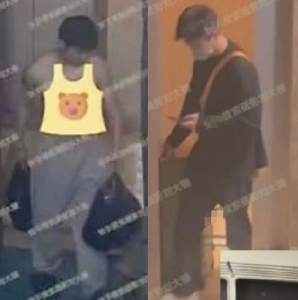 On November 4, Chinese media outlets released photos of the star co-habiting with Zhai Zilu, in which he appeared to go in and out of her apartment freely, pointing out that he stayed there for 4 days. Besides filming the two heading out together, Zhai Zilu was also captured leaving her home to dispose of garbage while topless.

Zhai Zilu had previously collaborated with Fair Xing (邢菲) on costume drama Lost Track of Time <覆流年>, where he played the crown prince Mu Chuan, and had starred in many scenes opposite the lead actress. Sharp-eyed netizens even found proof that Ouyang Nana had viewed the onscreen pair’s Weibo conversations online.

Displeased with their idol, they criticized her for “only caring about dating and neglecting her career”, and for blatantly ignoring them. Impassioned fans commented, “If today you claim that you’re only friends with (him), I’d still believe you… your fans can even help you cover (the relationship) if there were no photographic evidence. Yet you openly allowed anyone to take photos of you (two), do you still have a heart? Why don’t you just quit entertainment?”

Yet other fans also said rather than being angered, they were more “disappointed” with their idol, and harshly called her out for getting together with Zhai Zilu just three months after they filmed her music video together on August 4.