Nancy Wu Accused of Promiscuous Past; Involved With 7 Men in 9 Years? 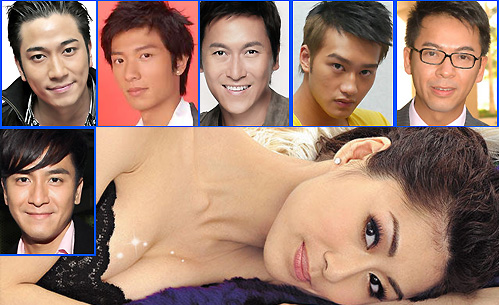 With Nancy Wu’s (胡定欣) acting skills gaining increased recognition, her love life became recent gossip fodder as well. The April 24th edition of Oriental Sunday claimed that 31-year-old Nancy Wu possessed a promiscuous past, in which she had involved herself with 7 men at TVB over the last 9 years! Several of the men in Nancy’s “stamp collection” were even married!

Aside from filming TVB dramas, Oriental Sunday alluded that Nancy’s favorite past time was “stamp collecting” old men, young men, married and single men! It was reported that her private love life was chaotic and crossed moral boundaries!

Nancy Wu’s first boyfriend in the industry was singer, Deep Ng. The pair started dating in 2003; Nancy was still living with her family at that time, thus was often photographed visiting Deep’s house at night. In 2004, Deep was arrested for possessing 1.2 grams of cocaine and his career became frozen. Nancy stood firmly by Deep at that time.

In 2006, Deep allegedly cheated with Jacquelin Chong (庄思敏), leading to his breakup with Nancy. Rumors claimed that Nancy scolded Jacquelin at TVB City, “You are wearing my old shoe!” Jacquelin revealed that she received a letter threatening rape, seemingly accusing Nancy of sending it!

When Deep’s mother died, Nancy and Jacquelin both cried at the funeral home, making others laugh at the ironic situation. When asked about Nancy’s alleged promiscuous love life, Deep replied that he did not feel that Nancy was such a woman. Deep said that Nancy was pretty, thus she had many pursuers.

Before graduating from TVB acting training class in 2003, Nancy filmed Triumph in the Skies <冲上云霄>. In the drama, she portrayed Joe Ma’s younger sister. Allegedly, Nancy often frequented Joe’s apartment at night. During that time, Joe’s wife was studying in France. Nancy denied the rumors and claimed that they were only “brother and sister.”

Attaching Herself to Poon Ka Tak

Nancy often chatted with producer Poon Ka Tak on the filming set. Allegedly, she gave Mr. Poon a body massage on the set. The story was a hotly discussed topic at the time.

During the filming of Twin of Brothers <大唐双龙传> in 2004, it was reported that Nancy and Leila Tong (唐宁) were both fighting over Ron Ng. The women both waited for Ron to get off work. An insider stated, “Nancy loved to ask Ron to take her home after work. She asked him out for drinks. Several days later, they were spotted taking a taxi together at night. The next morning, Nancy did not change her clothes at work. She did not go home the night before.”

Allegedly, both Nancy Wu and Joyce Tang (滕丽名) were interested in Derek Kwok during the filming of War of In-Laws 2 <野蛮奶奶大战戈师奶> in 2007. Derek was already a married man, with a wife in mainland China at that time. Nancy often referred to Derek as “my boyfriend” and the pair were rumored together in the early filming of the drama. It was not until later when Derek and Joyce were romantically linked that Nancy and Derek’s rumors died down.

Participating in Strictly Come Dancing 2 <舞动奇迹2> in 2008, Nancy and Kenneth Ma started dating. Nancy even moved near Kenneth’s neighborhood in Tai Koo Shing. Allegedly, Nancy was a high maintenance girlfriend with a hot temper, often complaining that Kenneth neglected her due to work and his family.

Kenneth denied the negative rumors about Nancy, professing that she was a good girlfriend. He cited personality differences for their breakup last year.

Nancy and Matthew Ko were romantically linked together after collaborating on several dance partnerships together for various programs. Asked about her dating rumors with Matthew Ko, Nancy said, “That’s impossible. We belong to the same manager. The chances are zero. If it did happen, I will treat that person to a meal!”

Regarding rumors that she was a “vixen” involved with 7 men over the last 9 years, Nancy Wu laughed. Nancy did not defend herself in an elaborate manner, choosing only to say, “People have called me [a vixen] since day one in the entertainment industry!” As for the 7 rumored men, Nancy said, “Thank you! Thanks everyone for your concern about me!” Pressed further about her rumors with Joe Ma and Ron Ng, Nancy said, “That was ‘N’ years ago!”

Nancy remained calm towards allegations about her promiscuous love life.  Without a trace of anger in her voice, Nancy said, “It appears as if my past onscreen characters have colored their perspective. Each time, my news is written from such an angle. I have become accustomed to this a long time ago! All of my friends are used to this. My family is used to it. They were not shocked and did not feel the need to console me.” Nancy also denied that she had asked male colleagues to go drinking with her, claiming she did not possess such drinking habits.

Jayne: Nancy’s reaction was quite calm. Perhaps she should have elaborated on her explanation a bit, since being called a promiscuous woman may be quite damaging to her reputation, especially in Hong Kong.

74 comments to Nancy Wu Accused of Promiscuous Past; Involved With 7 Men in 9 Years?