Nancy Wu and Rosina Lin Have the Same Taste 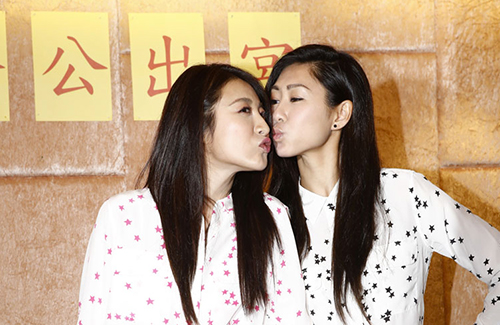 Nancy and Rosina immediately connected and became good friends after collaborating in the series. Not only do the two costars share similar interests, they also share similar tastes in music and style. “It’s really hard to believe how similar we are,” said Rosina. “Once during break, we were sitting together but listening to our own music. I looked over at her and saw that she was listening to the same song as me, and at around the same sound volume too.”

Both Rosina and Nancy wore matching “couple” blouses to the dinner. Nancy said, “That shows that we have similar tastes. Good taste!”

Asking Nancy if she would recruit Rosina into her club of best friends, which includes close buddies Myolie Wu (胡杏兒), Paisley Wu (胡蓓蔚), and Mandy Wong (黃智雯), Nancy joked, “People say our group was formed to court guys.” Asking Rosina if she’s interested, Rosina cheekily responded, “No need to, I already have you!”

Nancy then said she and her friends would always share photos on social media because their fans are always happy to see the girls being so supportive to each other. She added, “In this industry, it’s really hard to meet someone you can get along with.”

In regards to the news that Nancy had recently hung out with her male coworkers for the entire day, Nancy said, “After filming Ghost of Relativity <鬼同你OT>, I went straight to work for Short End of the Stick, so I didn’t get to have a break until recently. It was very hard for us to all find the right time to relax together.”

Nancy is currently on break, but she said she will be getting back to work soon to promote Ghost of Relativity, which will premiere on July 13.