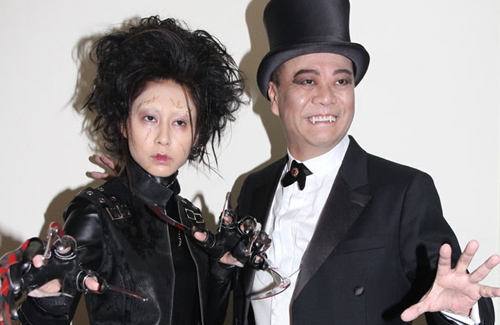 The cast of TVB’s newly-conceived drama series, House Full of Friends <一屋老友記> filmed scenes for the upcoming TVB Sales Presentation. Due to the upcoming Halloween holiday, the bonus scenes featured the cast in festive costumes.

While most of the cast dressed up as members of the Addams Family, Nancy Wu (胡定欣) was transformed into a creepy looking Edward Scissorhands, a horror fantasy film character who is known for having scissors for hands. Together with the lifelike scars on her face and dishevelled hair, Nancy’s makeup took more than two hours to complete.

On whether she was frightened by her own appearance after the transformation, Nancy said excitedly, “The look is absolutely perfect! I asked my makeup artist if she could make me look even more gruesome. I really wanted to go down to the cafeteria to scare people.” Nancy then highlighted that the look she had on was only meant for the bonus scenes, and that the drama series would still feature contemporary and more conventional looks.

She added that she was looking forward to working together with Bobby Au Yeung (歐陽震華), who would also be starring in House Full of Friends. Nancy further revealed some highlights of the drama, “In the drama series, my character is part of a construction team and I will have to work with cement as well as flaunt my muscles.”

While filming Heroes of a Walled City <城寨英雄>, Nancy injured the tendons in her thumb. “I burst into tears at the time because of the immense pain. I went for a hospital examination and fortunately the bone was not injury. I strained the tendons and can only film non-action scenes for now.”

Bobby said, “Nancy and I banter a lot in the series. Nancy has been in TVB for over ten years; she’s grown up. Her acting is very stable now and is a hot contender for Best Actress.”