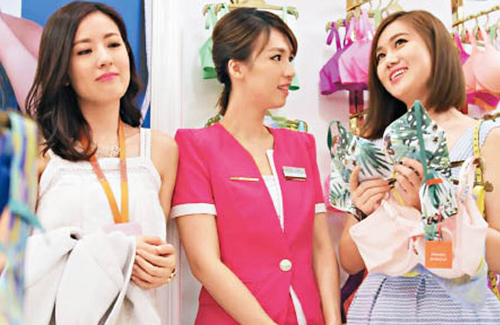 The first episode of TVB drama My Unfair Lady <不懂撒嬌的女人> aired with positive ratings of 24.2 viewership points on average, and peaking at 25.3 points. Shot in Shanghai, Taiwan, and Hong Kong, My Unfair Lady examines the different types of women and their perspectives on love.

Besides introducing the characters, the pilot episode compares the body types of Shanghainese women versus Hong Kong women. Representing Hong Kong was Natalie Tong (唐詩詠) who was subject to ridicule in the first episode by a Shanghainese girl, played by Snowy Bai (白雲), in a local lingerie shop. Playing a character that possesses 32A bust, Natalie bumped into Snowy, who laughed at Natalie for being flat-chested and for having a body of an 11-year-old.

When viewers asked if Natalie indeed possesses a 32A bust in real life, she laughed, “I’m not going to tell everyone my real numbers!” Asked if she was embarrassed, Natalie said, “No! This is just for playing the character! I’m happy that everyone is so interested in the series, that means no one is second-guessing my character. Don’t forget to keep watching; there will definitely be more quotable moments in the future!”

Snowy, who shows off her E-cup figure in My Unfair Lady, explains that women come in different shape and sizes. She expressed, “I don’t know if females in Shanghai have bigger busts or not, but those from Northeastern China are definitely bigger – but I’m talking about their overall body size.” Asked if she felt embarrassed that the show focuses on her bust, Snowy said, “No! We hope to bring these controversial points to limelight. This is a comedy after all; we want a ‘Wow’ factor.”

Promoted as TVB’s very first series shot in 4K, the visual quality of My Unfair Lady does not disappoint. Besides the beautiful coloring and bright images, the artistes’ skin appear to be a lot smoother and softer. Jessica Hsuan (宣萱), who is 46 years old, appeared to have fairly wrinkle-free skin under the new 4K technology. The series also employed the embedding of screen caps within the series itself. In the pilot episode, this allowed viewers to simultaneously watch both Natalie and a screen cap of her actual phone screen while she was spying on her boyfriend.

3 comments to Natalie Tong Keeps Her Bra Size a Secret