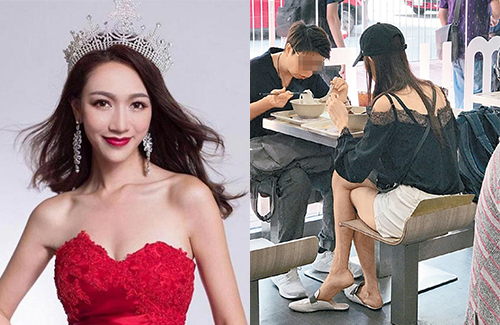 For years, TVB has always used the Miss Hong Kong platform to scout a new generation of artistes; and with recent Miss Hong Kong winners like Louisa Mak (麥明詩) and Crystal Fung (馮盈盈) being rising stars among the TVB troupe, it is reasonable to expect 2019’s winner, Carmaney Wong (黃嘉雯), to be treated in the same way.

Unfortunately, due to political unrest and commotion among the Hong Kong society, Carmaney has been jobless for nearly two months. In normal Miss Hong Kong fashion, the winners usually spend a year attending shows and public events to promote the city, but with no offers coming in, the 25-year-old finds herself to be at a dilemma.

But Carmaney doesn’t seem to be too stressed about the lack of work. Despite having wealth, the paparazzi noted that the 25-year-old is actually very down-to-earth: she would eat alone in small shops and go grocery shopping for herself and her family. Recently, Carmaney was seen riding the MTR going to Causeway Bay to get her hair done at a salon. She was dressed casually and comfortably in shorts and a simple black top. She then went to dinner to eat with her boyfriend, a Swiss national currently working as a marketing executive for a digital company. They even managed to catch a movie after dinner.