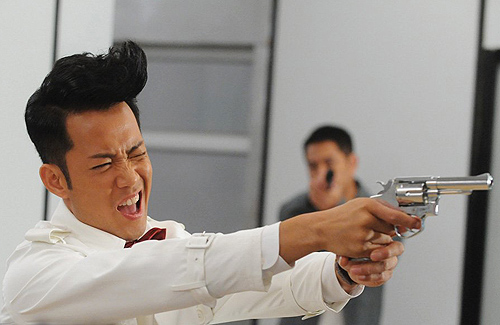 With more and more TVB artists opting to shoot for other productions, TVB dramas are beginning to lose its weight. But maybe this is a good thing. Thanks to them, talented second-tier artists like Ruco Chan (陳展鵬), Edwin Siu (蕭正楠), Ben Wong (黃智賢), and Oscar Leung (梁烈唯) are now pushed to the top. Ngo Ka Nin (敖嘉年) is a preeminent example – the 40-year-old star has jumped from late night DJ, to news reporter, to kelefe, to supporting actor, and finally to leading star.

Ka Nin came to prominence after portraying the villainous Chiang Bit Man in 2009’s award-winning drama Rosy Business <巾幗梟雄>, in which Ka Nin also won Most Improved Actor at the TVB Anniversary Awards for his impeccable performance that year.

“[TVB] executives originally believed that I wasn’t good enough for the role; they didn’t believe that I would be able to handle a role with such heavy screen time. Tim Gor insisted to have me try it. If it wasn’t for his support, I would have lost this opportunity.”

Ka Nin’s role as Sparerib in the second Rosy Business installment, No Regrets <巾幗梟雄之義海豪情>, was an even larger success; the role earned him a top five Best Supporting Actor nomination at the 2010 TVB Anniversary Awards, one year after Ka Nin’s win as Most Improved Actor. However, Ka Nin’s most successful year also became his most stressful.

“The pressure was huge,” said Ka Nin. “My emotions were very unstable; I was really happy when I hear praises, and really sad when I got criticized. When it was time to announce the winner [of Best Supporting Actor], my adrenaline shot up really fast. I would be disappointed if I didn’t win.” In the end, Ka Nin lost out to his No Regrets costar, Evergreen Mak (麥長青), to Best Supporting Actor. “It’s an honor to compete against seniors like Evergreen Mak and Dominic Lam (林嘉華). What more can I hope for?”

Ka Nin grew up humbly in an old housing estate in Lam Tin of the Kwun Tong District, New Kowloon. His father worked as a Chinese chef so Ka Nin spent most of his days sitting in the kitchen with his father. Ka Nin’s father liked to gamble and often fought with his mother. After years of giving each other the cold shoulder, Ka Nin’s mother finally left the family when he turned 14 years old.

His father met his second wife, who is from mainland China. Contrary to popular fairytales starring stepmothers as villains, Ka Nin’s stepmother was kind and caring.

“She treated me like her own son. When she had a stroke and lost the hearing of her right ear, her physical appearance completely changed. That day, I cried for hours. I never expected people to change so much in just one day.”

With the support of her family, Ka Nin’s stepmother recuperated quickly. To support his parents and two younger half-siblings, Ka Nin immediately enrolled to a technical institute in Kwun Tong after his high school graduation. He earned a degree in fashion design, and was hired as an assistant designer at a nearby garment factory.

“I frequently went on business trips to mainland. One day, the factory suddenly went bankrupt and we all lost our jobs overnight. We complained to the labor department and managed to retrieve $1,000 HKD.”

Ka Nin found an ad about hiring RTHK DJs, and immediately applied for an audition. “I auditioned with six other people. I was put in a glass room, and when the red light turned on, I had to introduce myself. I was super nervous and stammered.”

To Ka Nin’s surprise, he beat out one thousand other auditioners and was one of the sixty who were given a chance to advance to the next stage. Sixty came down to fourteen, and fourteen was narrowed down to the final four, in which all four were given DJ contracts. Ka Nin was one of the four.

“I originally helped Alex Lee (李志剛) with his on location interviews. I was then recruited to do a late night radio talk show. Those who have a history of insomnia may remember me,” Ka Nin joked.

“Hung Chiu Fung (洪朝豐) was my master. He enlightened me with his teachings, and we used to host events at bars in Jordan. Afterwards, he left for TVB to host Good Morning Hong Kong <香港早晨>, and recommended me for a camera audition. If it weren’t for him, I never would have come to TVB.”

Ka Nin’s first job at TVB was as a news reporter for Focus on Focus <城市追擊> in 1997, an informative program concerning Hong Kong’s latest breakout news. Ka Nin hosted the program for a few more years before he was transferred to the drama department in 2001. His first role was as the god “Muzha” in the fantasy drama, Gods of Honour <封神榜>.

For the next years, Ka Nin was put in kelefe or smaller supporting roles in TVB dramas. It was not until 2009’s Rosy Business when Ka Nin really made it to the headlines.

“It was him who believed in me and let me try it,” said Ka Nin. “If it wasn’t for him, I wouldn’t be as successful as I am now.”

Tim Gor is both a teacher and a benefactor for Ka Nin. “I rarely see him yell at people… actually, I’ve never seen him do it. The only things he would angrily complain about are schedule postponements or cancellations in his office.”

Currently starring as the second lead in quirky detective drama Bullet Brain <神探高倫布>, Ka Nin grew so worried about the ratings that he couldn’t sleep for days. He finally asked Tim Gor one day, “How well would the ratings do?” To Ka Nin’s amazement, Tim Gor calmly said, “The most important thing is the filming process of a production. Ratings cannot be controlled.”

And with these words, Ka Nin relaxed. “Now, I learn to focus on just my performance.”

He may be the star of tomorrow, but Ka Nin has not forgotten about his humble beginnings, the hardships his parents went through to raise him, his challenging days as a low income employee, or his early years as a struggling TVB artist. “I am aware that my life has changed, and I am satisfied with my achievements, but I am not haughty. There are many other artists who are still out there struggling, and I am definitely considered to the luckier half. There is still much left for me to pursue.”