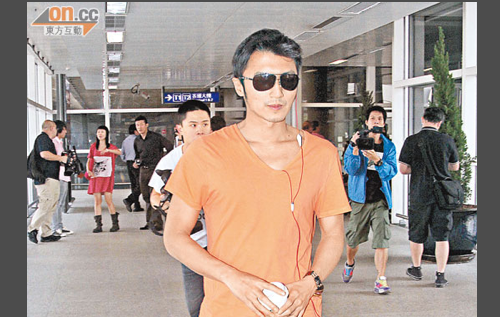 Wearing a black leather jacket and riding a motorcycle at a promotional event in Shanghai the day before yesterday, Nicholas Tse (謝霆鋒) was asked about his two sons, Lucas and Quintus, by the media. Breaking his normal silence, Nicholas replied frankly and even indicated that he was still good friends with Cecilia Cheung (張栢芝) after their divorce!

Asked if Lucas or Quintus were to fall sick and how the situation would be handled, Nicholas smiled and said that he will allow Cecilia to take care of the situation. “We are still good friends. She is also in Shanghai filming right now. Perhaps I will return to Hong Kong to visit my sons.” Apparently, Nicholas and Cecilia remained in touch and had a very good relationship despite their divorce.

Staying in Hong Kong for Only One Day

Shortly before 1 PM yesterday, Nicholas was spotted at the Hong Kong airport dressed in an orange T-shirt and wearing sunglasses. He indicated that he had flown from Shanghai to Hong Kong. Asked whether he was there to celebrate his mother, Deborah Li’s  (狄波拉)birthday, Nicholas did not answer and  hurriedly left. At that moment, an elderly woman requested in Mandarin to take a photo with Nicholas, while mistaking him for Raymond Lam  (林峯).

Nicholas’ return to Hong Kong was quite hurried, as tomorrow, he will need to fly to Hefei, China to attend the 2011 Golden Rooster and Hundred Flowers Film Festival, where he will be issuing the Best Actor award. After completing his work, Nicholas will then return to Hong Kong again to celebrate his mother’s birthday.

In November, Nicholas will fly to Shanghai to film Derek Yee’s (爾冬陞) new movie. Nicholas has already completed the filming of mainland series, The Next Miracle  <下一個奇迹> in which a photo featuring Nicholas rescuing his beautiful costar has been exposed.

Since filing for divorce, Cecilia Cheung has been embroiled in numerous gossips. Recently, Cecilia was rumored to be romantically pursued by her management company, AEG Group’s boss, Yu Yuxing (余毓興).  Yesterday, Yu Yuxing clarified, “The rumors are entirely false and absurd! I am simply friends with Cecilia Cheung!” Mr. Yu hoped that the rumors did not affect their family and their own reputations. Mr. Yu’s lawyer has already issued letters on libel grounds in order to clarify the matter.

As for Cecilia Cheung taking vacation for no apparent reason, Mr. Yu supported her, “You can ask the production crew. Everyone is very satisfied with her. We do not know what led to the circulation of the rumors!” Mr. Yu lashed out that the rumors were fabricated from nothing.

Jayne: Nice to know that Cecilia Cheung and Nicholas Tse are still on good terms, for the benefit of their children.