In the entertainment industry for 20 years, Nick Cheung Ka Fai was crowned the Best Actor at both the 2009 Hong Kong Film Awards and at the Film Critics Society Awards for his role in “The Beast Stalkers.” Celebrating his double victory, Nick and his wife, Esther Kwan Wing Hor appeared at both post-award parties. Upon the reporters’ request, Nick and Esther kissed on the lips for the camera.

Nick even fulfilled his earlier promise to kiss the reporters if he were to win the Best Actor Award at the 2009 Hong Kong Film Awards. Nick laughed and said, “I’m so flirtatious!” Did Esther mind that Nick kissed all the female reporters? Esther laughed and said, “Let Nick play to his heart’s content!”

After winning the award, will Nick’s filming fees increase? “In several days, I will meet with EEG’s boss, Albert Yeung Sau Sing. I hope we can discuss that topic then.”

Nick arrived in EEG’s celebration party for “The Beast Stalkers” in Happy Valley and posed for photographs with numerous fans. Liu Kai Chi, who received the Best Supporting Actor Award for his role in “The Beast Stalkers” was present, along with Director Dante Lam and EEG’s owner, Albert Yeung. The men opened a bottle of champagne to celebrate the success of the movie.

Does Albert Yeung intend to reward the cast and crew of “The Beast Stalkers” with a special bonus? “Yes! We will immediately plan to film a sequel for ‘The Beast Stalkers.’ I was awakened from deep slumber with the news that the film won numerous awards!”

Jayne: A big congratulations to Nick Cheung and Liu Kai Chi, who has been overdue in receiving an acting award! Most of the media expressed surprise that the awards were more fair this year, rather than giving the awards to more “idol-type” artists. 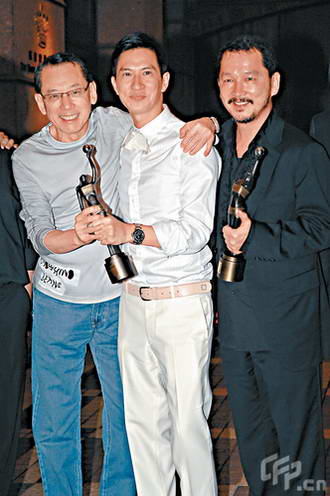 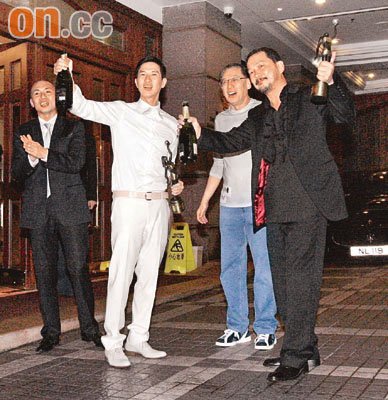