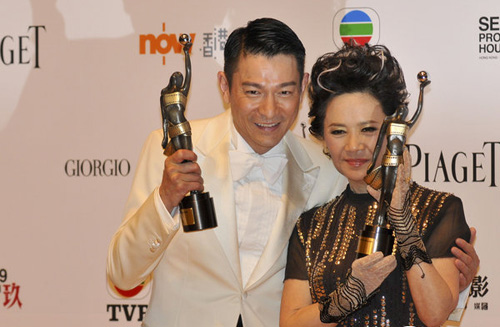 A Simple Life has swept major film awards since it was first unveiled at the 2011 Venice Film Festival, in which Deanie Ip won the prestigious Best Actress Award. The 64-year-old indicated that she was extremely happy when accepting her HKFA Best Actress Award, indicating that most awards nowadays were granted to younger artists. She was grateful for the recognition that A Simple Life brought upon her professional career. To reward herself, Deanie will be traveling to Australia to see the solar eclipse in November.

Aside from his HKFA Best Actor Award, 50-year-old Andy Lau was congratulated as a soon-to-be father. His daughter’s birth was expected to occur in June 2012. When Sandra Ng (吳君如) presented the award to him, she joked, “You are already so advanced in age and you can still knock someone up!” Although Andy appeared to be awkward, he joked, “She (Sandra) said too much! I will punish her later!”

Andy revealed that he intended to leave his trophy at his fan club for memories. Since the results of the HKFA Best Actor Award was announced late in the evening, Andy did not immediately call home to share the news with his family and wife, Carol Chu (朱麗倩).

It was the fourth time in which Ann Hui has won a HKFA Best Director Award. Flying Swords of Dragon Gate <龍門飛甲>won the most number of technical awards, including Best Action Choreography and Best Visual Effects Awards.

Lo Hoi Pang (盧海鵬) won the Best Actor and So Hang Shuen (蘇杏璇) won the Best Actress Awards for their performances in director Johnnie To’s (杜琪峰) Life Without Principle <奪命金>. Since So Hang Shuen has been hospitalized for diabetes for three months and unable to accept the HKFA Award in person, Sean Lau (劉青雲) accepted in her honor. The 61-year-old indicated that her frail health will undoubtedly limit her future oncreen performances.

Below is the complete list of the 31st Annual Hong Kong Film Awards:

Best film of Mainland and Taiwan: You Are the Apple of My Eye

Jayne: Congratulations to the winners of the HKFA Awards! I was hoping that Kenneth Tsang would win the Best Supporting Actor though!

By the way, if the HKFA Best Supporting Actress’ name of So Hang Shuen does not ring a bell, she portrayed Felix Wong’s mother in Legend of the Condor Heroes and stepmother in Looking Back in Anger.