Oscar Leung Advised Not to be Lazy and Arrogant 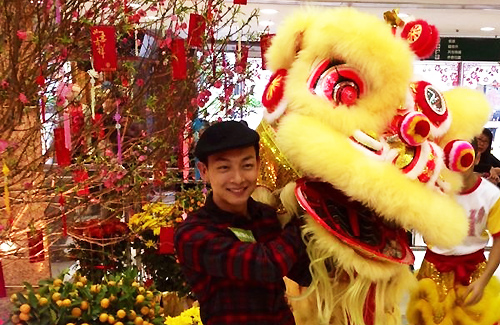 Oscar Leung (梁烈唯) thinks that his career is akin to harvesting a crop and he has spent a lot of time and effort sowing and fertilizing the plant, which finally after 11 years, is beginning to sprout.

It has been a promising dragon year for Oscar in 2012, with memorable performances in several television series, including L’Escargot <缺宅男女>, Tiger Cubs <飛虎> and The Confidant <大太監>, just to name a handful. After working hard for more than 10 years, he finally bagged his first award, the Most Improved Actor Award, at the TVB Anniversary Awards ceremony.  Up on the silver screen, he made a memorable impression as Chicken in Young and Dangerous: Reloaded <古惑仔:江湖新秩序>. However, Oscar thinks this is merely the beginning of his success. For the new snake year, he hopes to achieve even more, including a career in music.

Like many Hong Kongers, just before the beginning of the Lunar New Year, Oscar went to the Ji Gong temple to pray and seek divination for his career in the new year. He drew lot number 48, titled “Emperor Wu Prepares for War”, which, according to the interpreter, was a good lot. The interpreter explained, “The inquirer will meet many ‘gui ren’ in the new year. However, he cannot be lazy and arrogant but still must continue to work hard in order to achieve success.” Oscar agreed with the prediction. He said, “Coincidentally, I have often asked myself if I have been complacent recently. For example, I used to work out to keep myself fit. But I have not been doing much exercise lately. Instead, I have been partying and eating a lot. I tell myself I’ll just exercise and make up for it after all the partying.”

The prediction lot serves as a timely reminder instead of an unwanted piece of advice as the ambitious Oscar is not one to rest on his laurels. He admits that it has always been his wish to train under Jim Chim (詹瑞文). He revealed, “After acting for so many years, I still do not have the aplomb to act freely in a role. I believe Jim Chim could help me resolve this problem.”  Not only does Oscar seek to improve his acting skills, he wants to learn new skills such as improving his Mandarin and learning to dance.

In the snake year, Oscar will continue filming for the upcoming movie, Heavy Flavor <重口味>, in which he has a leading role in one of the sub-stories. “I hope everything goes smoothly. I also hope to take on more roles on the silver screen as the large scale of the movie industry will allow me to try on more new roles.” Not forgetting his roots, Oscar never thought of forsaking his career on the small screen but hopes to be able to work on 2 television serials at least. With the sequel of Tiger Cubs already in the line-up, Oscar may just have his wish fulfilled.

On top of his acting career, the karaoke-goer also hopes to be able to start a career in singing in the new year.