Shaw Brothers’ web drama Flying Tiger <飛虎之潛行極戰> is in for a long ride. Within an hour of its double-episode premiere on China’s Youku and Hong Kong’s myTV SUPER, the police action drama surpassed 100 million views, and has become a trending topic of discussion in Hong Kong. The cast of Flying Tiger have all shared their excitement for the drama’s success, and are more confident than ever to see bigger numbers in the future.

Flying Tiger stars Michael Miu (苗僑偉), Bosco Wong (黃宗澤), Ron Ng (吳卓羲), Eddie Cheung (張兆輝), and Michael Wong (王敏德) as members of the Hong Kong Police who are warped into a revenge plot. Although it’s only been a few episodes since its April 6 premiere, Ron, who stars as Senior Inspector Marcus Ko of the OCTB, has already made headlines for his daring jump stunt in the premiere episodes.

“I’m very satisfied,” said Ron, when asked for his thoughts on the drama’s success. “I believe it will do better. Last night, Sam Gor [Michael Miu] called from Japan to ask us about how the show’s been performing. He was feeling anxious.”

Ron added that the show’s cinematic filming style most likely had a part in contributing to the show’s initial success. “The filming style is a little different from other [Hong Kong dramas]. The director has experience, and the actors gave it all they got.”

Ron wasn’t the only star of the show. Oscar Leung (梁朝偉) has also been turning heads for his hysterical performance of Kenny, a young man obsessed with studying the human mind and finding the perfect ways to murder.

“My role this time has a very unique look,” said Oscar. “For that, we need to thank the art director and the hair stylist. It was a great collaboration, and that really helped my character. I’ve never played a character like [Kenny] before, and I am in my fittest shape for him. I actually don’t consider him as evil; it’s just that he has a very twisted version of reality. People today don’t really know what they’re doing, and [Kenny] brings that part of us into conversation.” 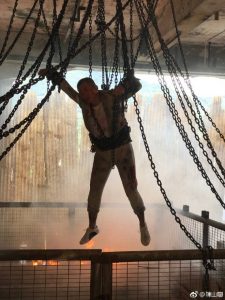 In the show, Oscar tortures guest star Joel Chan (陳山聰), who plays an undercover cop, to his death. Shocked by his death, not many netizens were expecting Joel to have such minimal screen time on the show.

“The early death was worth it,” he said. “Many viewers have told me that they liked my character, and I do want my character to leave an impact in the audience. When we were filming the show, [producer] Virginia Lok (樂易玲) suggested to the writers to increase my screen time, but because I was also busy filming Daddy Cool <逆緣>, that plan was scraped. It was a fun time. I caught up with the episode myself last night, and the show is really good. I hope viewers will continue to support it.”