Oscar Leung is the Emperor of “The Confidant” 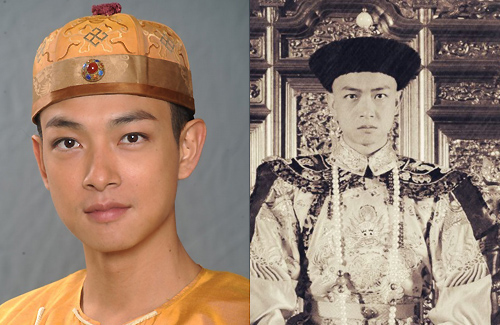 When most people hear the name “Oscar Leung” (梁烈唯), they may immediately think of Tiger Cubs’ <飛虎> winking sniper, Chong Chuk Yuen. Next in line would probably be L’Escargot’s <缺宅男女> insufferable and idle “Kwan Yi Gor.” And maybe people would still remember Oscar’s arrogant teenager roles from 2004’s Shine On You <青出於藍> and 2008’s Your Class or Mine <尖子攻略>. But never would people connect the five-foot-nine Oscar in roles other than the young boy-next-door or the insignificant mobster.

When Oscar was sent a notice that he would be guaranteed a role in The Confidant <大太監>, Oscar was certain he would be portraying an eunuch character. “In the first one to two months after I got the notice, I would check out historical books about Qing dynasty eunuchs and would read them in my spare time,” said Oscar. “I didn’t know my role ended up being the emperor! I had to start my research all over again!” Oscar laughed.

Oscar admitted that he never found himself to have the regal air of an emperor. Whether it was his body figure, looks, or stature, Oscar could not find any reason as to why the producer cast him as the Tongzhi Emperor. “Frankly, I didn’t want to believe it at first. When I first started filming, I felt very fake and unrealistic. After a while, I realized that I didn’t look that bad as an emperor. I actually had a lot of fun.”

Compared to Kangxi, Qianlong, or even Guangxu, there has been relatively less information regarding Tongzhi’s life and reign. There were even fewer fictionalized accounts of Tongzhi in the media. Oscar did not find the lack of resources to be necessarily a setback, and remarked that now he has more freedom in portraying the role. “There hasn’t been much portrayals of Tongzhi on television or film. I don’t have to be stressed about trying to meet or not meet the expectations that people would have for the character. I had much more freedom when it came to portraying the role.”

This does not mean that the role is any less challenging. “I play Tongzhi from age 14 to the end. At my current age now, I am pretty far away from being a 14-year-old. It was challenging to firmly grasp the mind of a teenager.

“Teenage angst aside, Tongzhi is actually a very complex character. The events he would encounter are also very complicated. He is a challenge to portray in general. It is the challenges that makes acting fun!”

Portraying lowly, second-tier characters his entire career, Oscar surprised the audience with the portrayal of the cool and collected SDU sniper, Chong Chuk Yuen in Tiger Cubs. Now with an emperor role added to his filmography resume, Oscar expressed that 2012 has been a very successful year for him.

Oscar debuted in the 1999 film, The Young Ones <監獄風雲之少年犯>, and with 14 years of experience under his belt, Oscar should have no problem when it comes to acting. But the 33-year-old actor believes that he still has much to learn.

“It’s hard for me to stay concentrated and focused. There are many occasions when my mind would go all over the place, and my acting would become inconsistent. I am not like Wayne Lai (黎耀祥) or Power Chan (陳國邦). They are able to completely focus on their characters. They become the characters. There are often times when an actor could not get back into the mindset of their characters after taking a short break. But [Wayne and Power] can.”

Acting is not only about knowing where to stand in front of the camera or memorizing your lines. To make the audience remember your character, you also must give them a little token of remembrance. In Tiger Cubs, Yuen’s “wink” was never written into the script. Yuen was written as a very cool and serious character, but Oscar decided to give the character a softer side by having the character wink as a silent response. Yuen’s unique characterization definitely won over a lot of fans!

“I always give my characters a little distinctive habit so the audience will remember the character more,” said Oscar. “In Tiger Cubs, I had Yuen do his iconic wink. In The Confidant, Tongzhi is very attached to his court necklace. In L’Escargot, Kwan Yi Gor often fiddled with his clothes and zippers.”

As Oscar reflected on his accomplishments and setbacks in the last ten years, he let out a smile. “I am very satisfied with my career right now. I did lose a bit of my private life, but the reason why I work so hard is because I want to have a stable career. I really enjoy my work, and I hope this streak of success will continue in the future.”

23 comments to Oscar Leung is the Emperor of “The Confidant”