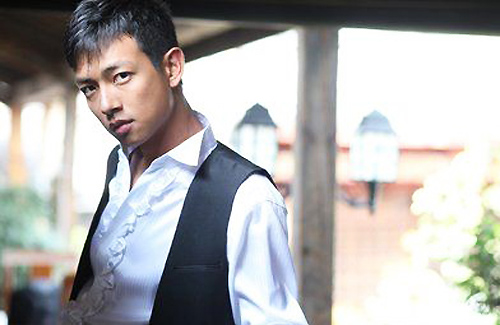 Oscar Leung (梁烈唯) is confident that his stellar performances this year will help him pocket the Most Improved Male Award at the 45th TVB Anniversary Awards, which will be held on December 17.

Having been in the entertainment industry for 12 years, Oscar feels that now is the right time for him to win an award.

Oscar bagged the My Favorite Promising Male Actor award recently at the 2012 Astro On Demand Favorites Awards in Malaysia. This boosted Oscar’s confidence for the upcoming TVB Anniversary Awards. This year, he is nominated for 2 awards – Best Supporting Actor for his role as Kwan Yi Gor in L’Escargot <缺宅男女> and Most Improved Actor award. Of the two, Oscar is hopeful he will win the Most Improved Actor award.

Coupled with his colleagues’ votes of confidence, Oscar is hopeful in winning this year’s Most Improved Actor award. He is satisfied with his performances this year, namely as Kwan Yi Gor in L’Escargot and Chong Cheuk Yuen in Tiger Cubs <飛虎>, which left deep impressions with  audiences. Oscar is also happy with his performance as Emperor Tongzhi in The Confidant <大太監>.

Oscar’s report card this year not only boasts of numerous television series such as L’Escargot, The Confidant, Queen of Hearts and Diamonds <東西宮略>, House of Harmony and Vengeance <耀舞長安> and Tiger Cubs, he also had a chance to dapple in hosting  Big Boys Club <兄弟幫> and filming Young and Dangerous: Reloaded <古惑仔：江湖新秩序>. He also had the opportunity to showcase his other talents such as dancing and singing in other large-scale performances.

Oscar was noticeably elated but humbled. He said, “For such a senior to tell me that, it has raised my confidence. But I’m already happy being nominated for that award.”

Oscar is grateful for the many opportunities that TVB has provided him with all these years. He is also thankful for the help and support he has received from his past veteran costars such as Roger Kwok (郭晉安), Wayne Lai (黎耀祥), Michelle Yim (米雪), Joe Ma (馬德鐘) and Felix Wong (黃日華).  He credits the support of his friends for his progress and achievements today.

Like many of his colleagues, Oscar predicts that the awards for the main categories will go to his costars. He especially has admiration for Roger Kwok in his role as the emperor in Queen of Hearts and Diamonds. Oscar feels that Roger has grasped the essence of Emperor Qixuan very well. As such, he has even used Roger as a model for his role as Tongzhi.

Without a doubt, Oscar believes the Best Actress and Best Supporting Actress awards should go respectively to Michelle Yim and Nancy Wu (胡定欣), his costars in The Confidant. Oscar praised Nancy for her hard work and her commitment to perfect the role in Gloves Come Off <拳王> as a deaf and mute female boxer. For Best Supporting Actor, he hopes that both Elliot Yue (岳華) and Power Chan (陳國邦) can both win the same award!