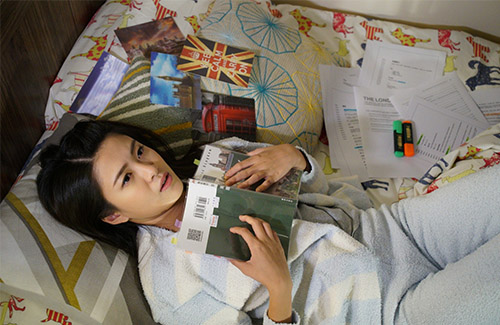 The TVB anniversary drama Fist Fight <兄弟> had its premiere last night. This testosterone-filled TV drama about a trio of long-lost brothers is different from TVB’s signature family-friendly genre, and with a first episode that successfully delivered a different kind of Hong Kong drama, the future of Fist Fight appears promising.

Fist Fight stars TV King Vincent Wong (王浩信), Mat Yeung (楊明), and Philip Ng (伍允龍) as a trio of brothers who are the key figures of a big conspiracy plot. Highly-anticipated, especially among netizens, Fist Fight will surely win at least a nomination for Best Drama at the year-end TVB Anniversary Awards to be held on December 16.

Whether or not Fist Fight will win Best Drama is up in the air, but this Fist Fight actress, on the other hand, will surely win something.

Although only one episode of Fist Fight has aired thus far, and this actress has only showed up for one scene, Kaman Kong (江嘉敏) appears to be the most likely candidate to win the TVB Anniversary Award for Most Improved Actress.

The 24-year-old has shown outstanding improvement this year, and although she has yet to show her full potential in Fist Fight, Kaman’s improved performance in Apple-colada <果欄中的江湖大嫂> is enough to leave behind positive impressions.

Kaman’s current strong competitors for Most Improved include Miss Hong Kong winners Louisa Mak (麥明詩) and Crystal Fung (馮盈盈), who also starred in Apple-colada. However, both actresses are still rookies with a small resume.