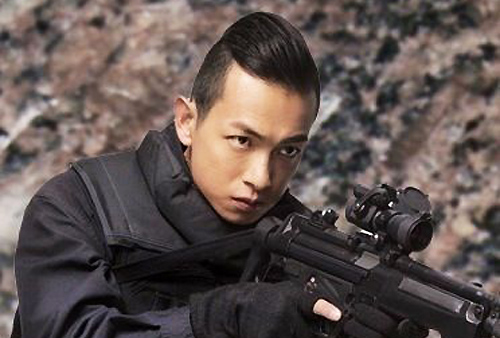 It is somewhat inaccurate to call Oscar Leung (梁烈唯), the 33-year-old sharpshooting star of Tiger Cubs <飛虎>, a newcomer. Oscar has been in the industry for nearly 13 years and has acted in more than 60 films and television dramas. In the past, people would acknowledge Oscar as that “bad student #1,” “addict #2,” or “gangster #3,” but now people are beginning to see him as L’Escargot’s <缺宅男女> “Kwan Yi Gor,” Tiger Cubs’ “Chong Cheuk Yuen,” and most importantly, people now recognize him as the talented actor, Oscar Leung.

At only 19 years old, Oscar debuted in the film industry as the lead character in the crime film, The Young Ones <監獄風雲之少年犯> in 1999. With such a prominent role as his debut, Oscar expected himself to eventually become a big movie star like Andy Lau (劉德華) and Aaron Kwok (郭富城). However, the entertainment industry was not as easy to break through as he had originally thought.

“Thinking back, no one even knew who I was in my first few years of acting in movies! I did not gain recognition until I acted in TVB’s Shine on You <青出於藍>. That is the power of television! However, my career faltered slightly afterwards, and I played the same small roles over and over again. A lot of people recognized me, but they did not know my name.”

Oscar is good friends with Chilam Cheung (張智霖) and his wife, Anita Yuen (袁詠儀). The trio is often caught eating out together, and the paparazzi would label Oscar as the “tiny star” who “sticks to” the Cheung family. Oscar sighed, “I believe that many do see me that way. When I was younger, I would be upset at these reports. Now, I have nothing to be upset about. Of course, some of my friends are definitely more popular and richer than me. Chilam and I have been friends for a long time, and he never thought of me that way. None of my friends do!”

The paparazzi also claimed that Oscar had to financially rely on his girlfriend, Tina, who had to pay for their dinner dates on several occasions. Oscar laughed, “What is wrong with that? We’ve been dating for nearly 10 years! I was not born into a rich family, nor do I have the ability to earn a lot of money. Normal couples would support and endure hardships with each other. There would be times when she would pay and times when I would pay!”

Oscar stated that his financial struggles were the hardest experiences he had to deal with since debut. The actor mused, “My bank account often read zeros. When I was still doing movies, I could sometimes earn up to six figures, and once I get my salary I would spend it all. Now that I’m in TVB, I can’t do that anymore. Everyone knows how poor TVB’s salary is. My dad would also laugh at me and say, ‘Your salary is only slightly higher than the foreign domestic helpers!’”

Soon after signing with TVB, Oscar moved out of his home and lived with his girlfriend, Tina, in Stanley. On payday, Oscar would immediately go to the supermarket to buy a month’s worth of rice noodles. Sometimes, he would buy some refrigerated steamed dumplings when he found good deals at the market. Vegetables that do not rot quickly, such as cabbage, were also included in his diet. When Oscar became fed up with eating rice noodles all day, he would spend about $15 HKD to buy four cocktail buns – one for lunch and another for dinner – and save the last two for the next day.

Oscar admitted that he considered leaving the industry after filming 2007’s The Green Grass of Home <緣來自有機>. “At the time, I was the crew’s laughing stock due to my heavy ‘lazy accent.’ I was beginning to feel that I didn’t belong here anymore, so I got a friend to teach me how to become a DJ. I actually learned quite a lot as a DJ!”

Showering at the Gym

Oscar’s career was revived again after appearing in the 2008 TVB sports drama, Your Class or Mine <尖子攻略>. “I never knew that my role as a delinquent student in Your Class or Mine would bring me back to the industry!” exclaimed Oscar. “I was nominated for ‘Most Improved’ and ‘Best Supporting’ Awards at the TVB Anniversary. The company even asked me to sign as a managed artist!”

While filming Your Class or Mine, Oscar was introduced to Sun Hei SC’s soccer team, and occasionally participated in the team’s sports events. Oscar said, “I joined Sun He’s B team, and met Alan Tam (譚詠麟). He told me, ‘You’re too skinny to be a striker! When someone crashes into you, you’ll fall down for sure! How can you be in the industry? The people in this industry should have an even stronger will to fight back!’ After he told me that, I decided to go to the gym!”

Oscar signed up for a gym membership at the South China Athletic Association. For the next few years, Oscar spent his leisure time training at the gym. “It was amazing! The gym had newspapers, magazines, TV, air conditioning, and bathrooms. One time, the shower at home broke, so I spent a few weeks showering in the gym instead! I didn’t even need to buy toilet paper for the longest time!”

Oscar’s shirt size went from size 44 to size 46 within a few years. “Alan Tam was very impressed with my appearance and he told me to keep up with this shape! I had to sacrifice many other things in order to pay for my gym membership, but it was all worth it.”

Oscar also revealed that it was his muscular figure that won him his best known role to-date in Tiger Cubs, “I originally wanted the producer to cast me in a random villain role, but once he saw my figure, he told me, ‘What? No! You’re so fit! You should be a SDU officer!’”

Bringing His Family Back Home

In 2002, Oscar’s father filed for bankruptcy due to his failed businesses. Oscar’s older brother soon followed in 2007, after being sued by the bank for his unpaid debts. “The bank convinced my brother to sign a document, which required him to be responsible for all of the liabilities of my father’s house! My brother had to pay over $1 million HKD of debt in three months!”

From 2009 to 2010, Oscar accepted as many job offers as he could. “I was willing to do everything. I accepted low-paying jobs, MC jobs, and filmed dramas nonstop! I was willing to do any kind of character, even if my character only shows up in one episode or one shot!”

Oscar continued, “My parents moved into a small flat in Yuen Long. The flat was separated into three different residential houses, and my parents lived in the middle. There was only one window. There was no room to put a sofa or a TV, and the dining table had to be in another really small room. I felt very guilty – my parents sacrificed so much to raise us, and yet they had to live in such a small place while I lived comfortably in Stanley. One night, I said to them, ‘I can’t have you guys live here anymore!’ I told them to give me a year’s time to find them another place to live. I remember that night very well. My mom and I cried so hard… it’s hard to explain that feeling. All I can say is that it was heart wrenching!”

A year later, during the filming of Tiger Cubs, Oscar finally was able to afford a larger place for his parents to stay. “I used all my money to pay for the flat’s deposit and paid half a year of rent in advance. When my mom found out, she was furious with my reckless decision, but I told her that I would not have rented this place if I could not afford it.

“I was actually really scared! What should I do half a year later? My salary simply could not cover the rent costs! The only thing I could do is to accept more filming offers. It happened before – there was one month in which I did not have enough to pay for the rent. I originally planned to ask someone to help me out with the costs, but then I decided to check my account to see if I was paid for any of my outside jobs… and there it was! They paid me! I felt blessed by the heavens. I was really touched!”

Oscar’s all-encompassing enthusiasm and devotion to his family is inspiring. After years of financial struggle, Oscar has now finally seen the light of day. “All I want right now is to take care of my family and my girlfriend. My parents are aging, and I cannot be as lazy as I was before. Now that my role in Tiger Cubs has become a huge hit, I want to use this chance to work even harder! I want to let that bank know that they may have gotten rid of my father and brother, but the Leung family still has me. We will not be defeated so easily!”