Al Cappuccino <反黑路人甲> star, Owen Cheung (張振朗), has received endless opportunities and made much progress in his career in the past five years. With his career down solid, it is speculated that the 33-year-old actor is thinking of settling down soon with girlfriend, ViuTV actress Renci Yeung (楊偲泳).

Whenever he does not have to work, Owen will spend time with Renci. Despite the budding typhoon concerns in Hong Kong, Owen and Renci met up with some friends to spend the afternoon out at sea water skiing. Before the couple got on the boat, Owen made sure to take care of their lunch needs and lined up at a cafe to pick up takeout. 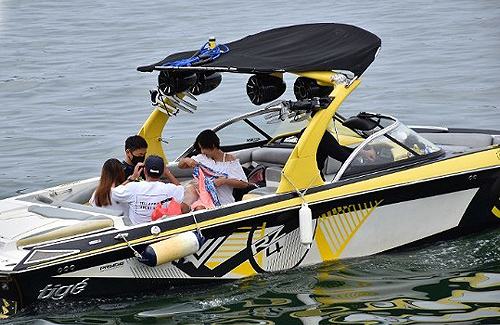 The winds continued to intensify as the day went by, forcing the couple and their two friends to come back to shore in the late afternoon. While heading back onto the shore, Renci walked with her hands free while Owen took charge and diligently carried all of the couple’s belongings and equipment.

When asked why they decided to go water skiing despite the typhoon warnings, Owen said they paid attention to the developing weather situation while out to sea and turned back when “it started to get dangerous.”

His protective gestures toward Renci are obvious throughout the day, and the couple is said to have moved in together after dating for two years. When reporters asked Owen to confirm whether or not they are living together to test the waters before marriage, he awkwardly denied cohabitation and said work is his main focus right now.