Known for playing upbeat and zealous characters, Owen Cheung (張振朗) has an extremely positive image with the press. But life hasn’t always been filled with happiness and rainbows. Working in the entertainment industry, it isn’t difficult to overcome yourself with a negative mindset—the industry is forever changing, and those in the circle has to constantly update and improve themselves to keep up.

For a period of time, Owen was nicknamed the “unlucky king”. Several of Owen’s dramas were pulled out of broadcast for reasons beyond his control, and Owen was stuck with no new series to promote and no new series to film.

“There was definitely a moment in time when I was always doubting myself,” he said. “I always asked myself the same question: am I suitable to be in this industry?”

Life didn’t seem fair for Owen. Even after months of strenuous hard work, his dramas saw no light of day.

“I’m the kind of guy who always wants to find a way to deal with problems,” he said. “I told myself that I have to continue on. To deal with my stress, I chose to do more exercise, as a way to encourage myself and to give myself a new direction. It worked, and I started to find and understand happiness again.”

And through this entire debacle, Owen has also learned that patience is a virtue, and hard work will find ways to pay off. Finding Her Voice <牛下女高音> finally aired, and both Airport Strikers <機場特警> and Al Cappuccino <反黑路人甲> were released this year.

“Thank God that both dramas did well,” he said. “Netizens like to call me the unlucky king, but I’m not that unlucky at all. There are plenty of artistes who are doing much worse. They lacked the opportunities that I had. Besides, the different setbacks I experienced in the past few years really helped me grow.”

For his role in Al Cappuccino, Owen had to maintain his platinum ash white hair. “It was a dream come true to play a character with white hair, but it wasn’t an easy journey,” shared Owen.

For role continuity, Owen had to continuously dye his hair for four months. To maintain the same color, Owen dyed his hair once every two weeks, and each time he had to gets his hair bleached at least three times.

“Four hours per session, and this lasted for four months,” he said. “I probably dyed it a total of seven times. I didn’t want the color to come off, so I washed my hair once every three days. It was both a very terrifying and amazing experience.”

Owen was initially worried that the constant dyeing and bleaching would damage his hair and cause hair loss, but fortunately for the 33-year-old, his hair stayed healthy and strong. “It’s all thanks to my hair stylist,” he said.

On His Relationship with Renci Yeung 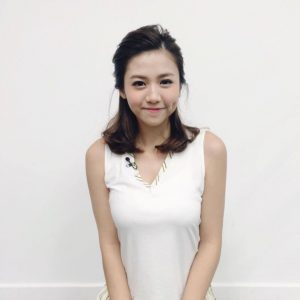 Last year, Owen confirmed his relationship with ViuTV actress Renci Yeung (楊偲泳). Unlike many idol actors who lose popularity with announced relationships, Owen’s popularity grew. Owen is very comfortable with Renci, and they are each other’s support system.

“When it comes to dating, I think the most important thing is to be happy,” said Owen. “Once you’re happy, then you’ll be invigorated and comfortable. Both of us really enjoy acting, and that actually takes up most of our conversations. Every time we finish a shot, we would always discuss it. We have a lot of things to talk about, and we both love exercising.”

As for how to maintain a strong, healthy, and long lasting relationship, Owen said, “Do not attempt to change the other person. We are all individuals who can think independently. We must learn to be open minded and be accepting.”