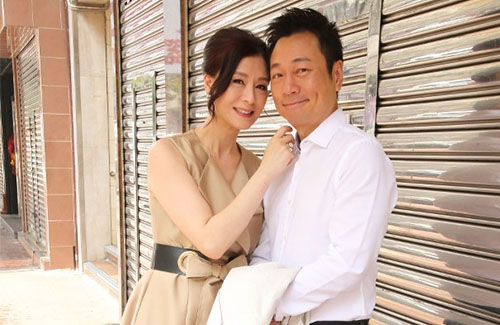 Veteran actress Patricia Ha (夏文汐) has officially started work on her first TVB drama Reversal of Fate <逆緣>, a fantasy drama produced by Amy Wong (王心慰). The 51-year-old actress will have a romance with her male lead Wayne Lai (黎耀祥), but the costars haven’t delved too deep into that relationship yet.

Yesterday, Patricia and Wayne shot a simple scene of their characters meeting in the rain. Patricia’s left foot was bandaged; she explained that she twisted her ankle, and was in the process of moving apartments.

In regards to her first collaboration with Wayne, Patricia said, “The feeling is great. We haven’t gotten to the point where our characters would interact at a more emotional level. The director wants us to take it slowly.”

Asking if Patricia is getting used to TVB’s long filming schedule, the actress shared, “I’ll warm up to it. Right now the longest I’ve had to film was twelve hours. I’ll be starting my main scenes next week, and I expect to have all-day schedules for the next two months.”

Patricia thanked TVB executive Virginia Lok (樂易玲) and producer Amy Wong for helping her ease into her role. “The problems I’ve come across were minor. I had trouble with a scene with Lai Lok-yi (黎耀祥), but after discussing it with them, we got it in our second try.”

Mentioning the hot weather, Patricia said, “It’s my worst pain. Even the wind is hot. I’m so impressed at Lai Lok-yi for not sweating even after four hours of filming. He can’t be real! It turns out that the secret is to stay still.”

As for working with Patricia for the first time, Wayne praised, “After all these years, she’s still so mysterious and cool. She’s probably not used to TVB’s filming schedule yet, so she may find it a little more difficult to do. I’m surprised at how easy-going she is. I used to think she’s really cool, but we ended up having many topics to talk about.”

Reversal of Fate stars Carlos Chan (陳家樂) as a man from the 1940’s who, after waking up from his cryogenic sleep, ends up in present-day Hong Kong. He meets his son (portrayed by John Chiang 姜大衛) grandson (Wayne Lai), who helps him ease into modern society. Rosina Lam (林夏薇), Elvina Kong (江欣燕), and Joel Chan (陳山聰) also star.